Great Lakes Airlines was formed to provide executive transport for the Homes-Blunt Company of Sarnia. Most of the traffic was to Toronto and back utilizing light twin engine aircraft.

Two DC-3s were purchased in 1967 to supplement the company’s Cessna 310 and tri gear Beech 18 as it began a scheduled service between Sarnia and Toronto. Two Convair 440 aircraft were bought in 1969 from Swissair. Called the Metropolitan, the piston twin engine Convair 440 carried forty-four passengers and bore a colour scheme with a broad red cheat line running through the windows of the white aircraft, The upper tree quarters of the tail was red and displayed a white map of the Great Lakes within a white circle. Once the Convairs arrived, the Beech 18 was sold to Air Windsor and the two DC-3s were sold to Pem Air of Pembroke. 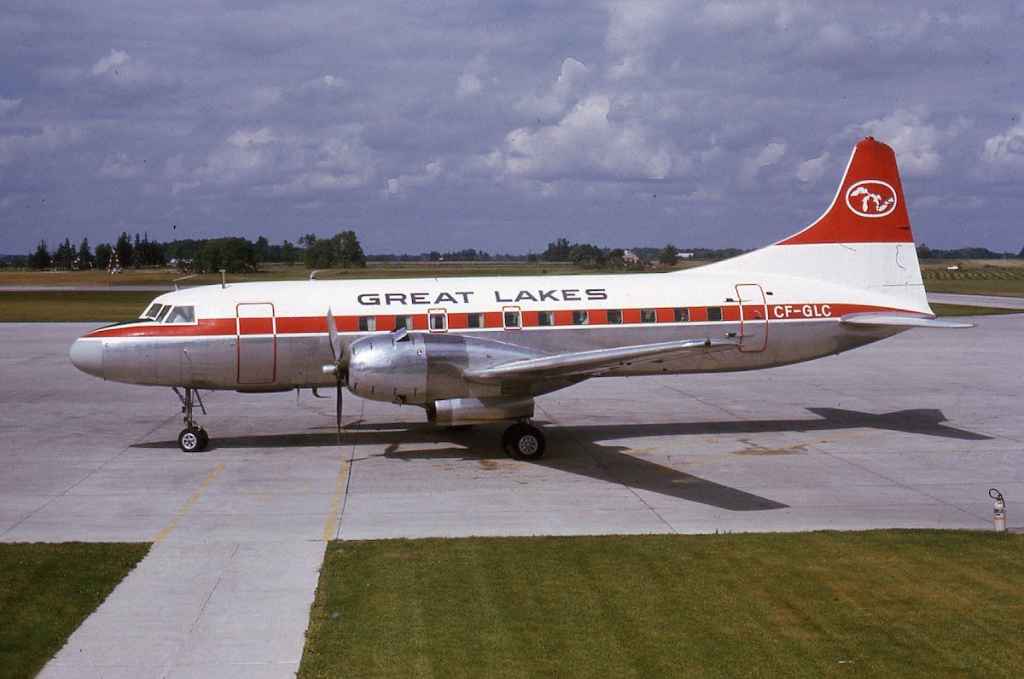 An absolutely magnificent shot of Great Lakes Convair 440 CF-GLC possibly at London, Ontario in July 1973. This aircraft was acquired from Swissair in December, 1969, and operated with Great Lakes until 1975, and was then parted out in 1976. In this photo it was still in the former Swissair scheme.

When London, Ontario, was added to the Sarnia to Toronto route in 1973, four more Convair 440s were purchased from Linjeﬂyg of Sweden. These white aircraft had a broad blue cheat line above a thin white cheatline and a thin dark blue cheat line below both and had an all-white tail. One of a variety of symbols was found on the tail, including a map of the Great Lakes in blue but with no circle, a stylized ‘GLA’ or no symbol at all. With the additional aircraft, Peterborough, Ottawa and Kitchener were added to ﬂights from Toronto. This rapid expansion of routes using old, unreliable equipment proved to be uneconomical and the three cities were quickly dropped. For a short period in 1975, all operations were halted except the Sarnia to Toronto route. An analysis of the problems faced by the airline showed that many ﬂights had to be unexpectedly cancelled due to aircraft unserviceability. The new routes had not been properly publicized and no feasibility studies had been made before opening new routes.

A group of Toronto businessmen bought the airline in 1975 and started to rejuvenate it. They moved the Toronto operations from Terminal One to Terminal Two and turned over the ﬂight handling to Air Canada in Toronto and London. Air Canada also handled all Great Lakes’ ticket sales and reservations on its computerized system. The Toronto to Ottawa via Peterborough route was resumed in April 1976 but Kitchener was never re-introduced to the schedule.

When Air Canada retired its Viscounts, there was a hockey charter market for a forty to ﬁfty passenger aircraft in Southern Ontario. Professional hockey teams, however, refused to ﬂy in old piston equipment and the decision was made to purchase Convair 580 aircraft from Allegheny Airlines. The Convair 580 was a Convair 340 piston aircraft re-engined with twin Allison 501 turboprops. The interior of this aircraft was the same capacity as the Convair 440 except that the galley and lavatory had been moved to the front of the plane permitting two additional rows of seats to be added, thus increasing the capacity to ﬁfty-two passengers.

These aircraft were all white with a brown cheat line through the windows. Below this an orange cheat line broadened downwards as it swept aft. Below this was another brown cheat. The new company logo was displayed on the white tail and the airline’s name appeared in brown on the upper fuselage. The Convair 440s were kept for a short time as backup aircraft before being sold or broken up.

The Convair 580 entered service with the company in March 1976, using experienced Allegheny pilots as co-pilots. Four aircraft were purchased within a year and the company was once again on solid ﬁnancial footing. In October 1976, Great Lakes took over all but one ﬂight per week between London and Toronto from Air Canada.

In January 1977, the company moved its headquarters from Sarnia to London, Ontario, and later that year purchased Flightexec Ltd. of London, which operated executive aircraft charters in southwestern Ontario using a Piper Aztec. The company continued to operate Flightexec Ltd. as a separate airline.

Great Lakes applied for the Toronto — Sault Ste Marie — Thunder Bay — Dryden — Winnipeg route relinquished by Transair when it merged with PWA, but the route was awarded to Nordair. In need of expanding its routes, Great Lakes also hoped that Air Canada would phase out its short DC-9 routes in Ontario (such as Toronto to North Bay and Sudbury), but it would be another decade before these routes would come available to the airline. Thus the company continued to operate with only Sarnia, London, Toronto, Peterborough to Ottawa route, with the London to Toronto segment being the most proﬁtable.

During the summer of 1979, Great Lakes began ﬂying small package charters from Toronto to Western Canada. The aircraft involved were stripped of their normal passenger seats and soon Great Lakes Convair 580s were seen frequently in Vancouver, Calgary, Edmonton and Winnipeg. In October of that year, Flightexec added Cessna Citation C-GJTX raising the ﬂeet of this subsidiary to seven aircraft based in London and Windsor.

A ﬁfth Convair 580, added in December 1979, carried the registration C-GJRP, JRP being the initials of the company President, James Robertson Plaxton. Regular scheduled ﬂights and charter ﬂights kept the airline so busy during February 1980 that it was necessary to drop the ﬂights to Western Canada for Purolator Courier until April 1980.

In January 1981, the company again dropped its Toronto to Peterborough and Ottawa service, which were picked up by Air Atonabee. In February, Great Lakes introduced its direct Toronto to Ottawa service operating Monday to Friday only. Great Lakes also formed an off-shore helicopter support division which included ﬁve Sikorsky S76As. The S76s were delivered in 1985. The company changed its name to AIR ONTARIO on April 27, 1981. Convair 580 C-GDTC was the first aircraft ﬂown in the company’s new colour scheme, a white aircraft with no cheat line, the title AIR ONTARIO displayed in dark purple on the upper fuselage. The purple tail was broken by a horizontal green stripe with a narrow white strip above it.

Purolator Courier services were reduced in March, 1981, and discontinued altogether in April, 1981, being taken over by Kelowna Flightcraft Convair 580s. In December, 1981, 50% of the stock of the parent holding company was purchased by the Deluce family of Timmins who were the owners of Austin Airways and White River Air Service. This story continues in the Air Ontario photo history page.

WANTED TO PURCHASE: If you have an aircraft slide collection that you would like to sell please drop me an email to henrytenby at gmail dot com .. thank you very much for visiting this page, and enjoy!