June 14, 2020, by Henry Tenby | Category: Airlines World - Vintage Photo Histories
Leave a comment
Prev1 of 12Next
Use your ← → (arrow) keys to browse

This selection of historic Argentine airline photos highlight not just flag carrier Aerolines Argentinas whose history is well know, but some of the long gone Argentine airlines like Trancontinental, AER, and Aerolineas INI, and I will provide some history on these airlines with help from R.E.G. Davies’ bible on the history of Latin American airlines that was published many decades ago.

First we’ll start with Transcontinental. One of the first, and certainly the one which provided Aerolineas Argentinas with the biggest intercontinental challenge, was Transcontinental, S.A., (TSA) formed on 5 September, 1956, by a group of private Argentine investors, inspired by Jorge Carnicero, who was connected with a United States non-scheduled airline, California. Eastern, which leased aircraft in exchange for a 25 per cent shareholding. All ﬂight personnel were of US nationality, but these were to be replaced by Argentines by 1962. 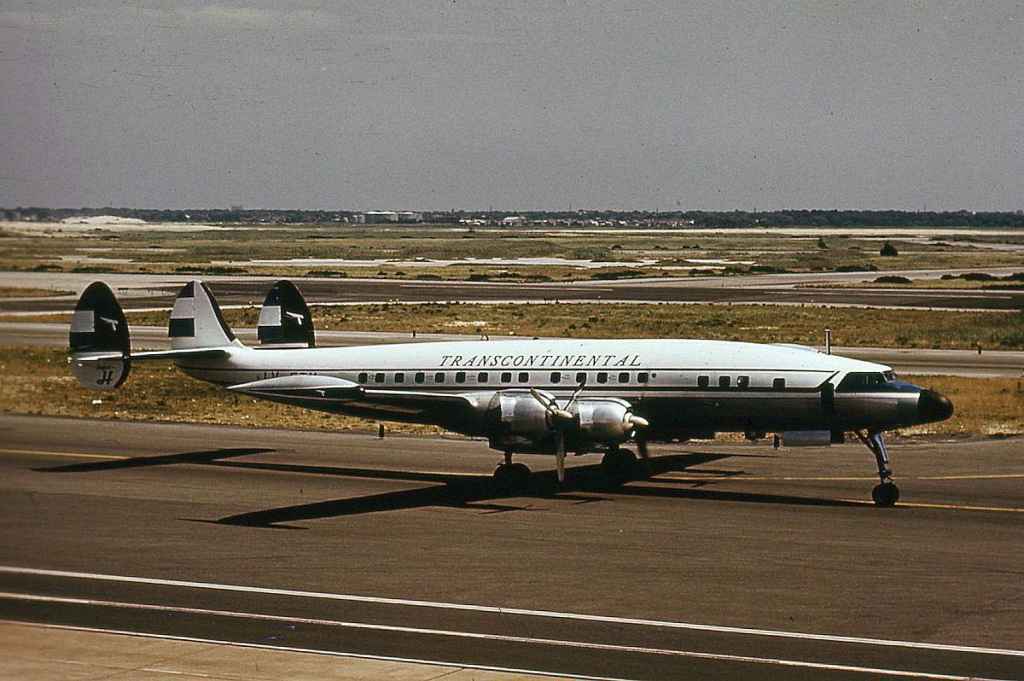 Transcontinental began operations in 1957 with a ﬂeet of four Curtiss C-46s and three Lockheed 1049H Super Constellations. The C-46s entered service on a domestic and local network which was notable for including the most desirable destinations: Cordoba, Tucuman, Salta, and Mendoza—some of the largest cities in Argentina—together with Mar del Plata, the seaside resort, and Montevideo, the Uruguayan capital. The Super Constellations opened a service to New York in September 1958 and to the mountain and lake resort of Bariloche, fast-growing in popularity, in February 1959.

Already, however, TSA had greater ambitions. In August 1958, it ordered two Britannia 305 propeller-turbine airliners from the Bristol Aeroplane Company (formerly ordered by Northeast Airlines), and these went into service on the New York route in March, 1960. In October, Santiago, Chile, and Miami were added to the impressive network, while Asuncion was included in 1961. Thus, the airline appeared to be doing well as its on-board service was good and its schedules convenient. It demonstrated its conﬁdence by ordering Convair 440s for domestic routes, and Convair 880s for international.

But like many other thinly financed Latin American airlines of the time, their long term success was not assured. A financial rescue operation was attempted in the Spring of 1961 by SABENA, the Belgian airline, Transcontinental SA suspended operations on November 8, 1961. Its ﬁnances were such that one of its Britannias was temporarily impounded in New York, but was later released on payment of $83,000 in cash owed for fees and fuel.

About a year after the founding of Transcontinental, a second privately owned Argentine airline got under way. Backed by Jose Ini, a wealthy Argentine businessman, who owned 73 percent of the airline’s stock. Aerolineas Ini was formed late in 1957 and applied for permission to operate to the United States. In January 1960, a DC-4 service started to Miami with fares substantially lower than those of the IATA members, and in September, 1960, DC-6s were introduced to offer pressurized comfort.

Ini’s route was via the South American west coast. At ﬁrst, with the DC-4s, stops were made at Santiago, Antofagasta, Lima, Guayaquil, and Panama; but with the longer range of the DC—6s, Santiago and Guayaquil were omitted. However, a stop was made at Cordoba, for trafﬁc-generating reasons.

At this time, the struggle for airline markets was raging throughout Latin America. On the one hand was the Establishment, represented by the IATA carriers such as Aerolineas Argentinas and Panair do Brasil—who, ofﬁcially at least, complied with the fares and rates laid down by international agreement. On the other hand was a group of airlines who dared to challenge the established order, and, in an attempt to attract trafﬁc, offered low fares to the public as an inducement. Down the west coast of South America, such competition was taking on new dimensions, with a group of airlines from different countries challenging PANAGRA’s supremacy and dominance. While Ini’s fare level was not at such a low rate, it was nevertheless low enough to make the whole operation financially tenuous.

On 1 July, 1960, Ini appears to have changed its policy, and joined IATA but its problems lay deeper than the mere setting of fares. By the end of 1963, the company reported a loss of $300,000 during the year, and was prepared for liquidation. The end was near. By the time IATA announced Ini’s official resignation on November 23, 1964, Aerolineas Argentinas had already been given permission to operate Ini’s route, which it proceeded to do a year later, with a Comet 4 service to Miami, with only one stop, at Lima. And thus marked the end of Aerolineas Ini.

Aerolineas Argentinas In the Jet Age

Aerolineas Argentinas took delivery of its ﬁrst Comet 4, named Las Tres Marias, on March 2, 1959, and after proving ﬂights on the main trunk routes, introduced the ﬁrst commercial jet air service in South America on 16 April with regular service from Buenos Aires to Santiago. These were stirring times for an airline which had had to survive a painful period in its history, weathering the storm of criticism because of crashes and the uncertainty of a change of management.

It was a source of pride, therefore, when, in quick succession, aircraft in the Argentine’s light blue colours opened the world’s ﬁrst jet service both across the South Atlantic, and between North and South America. On 19 May, the Comets started ﬂying to Europe, alternating to Rome and Frankfurt, or Paris and London, after stopping at Rio de Janeiro, Recife, Dakar, and Madrid and on 7 June, began service to New York, via Rio de Janeiro and Port of Spain In, fact among the world’s trunk air routes, Aerolineas jet service had been proceeded only by BOAC’s Comet 4s and Pan American’s Boeing 707s on the North Atlantic.

Tragically, Aerolineas Argentinas lost two of its Comets within a year, happily without passenger fatalities. On 26 August, 1959, one crashed near Asuncion, where it had been diverted because of runway work at Rio de Janeiro; and in February, 1960, one was lost on a training ﬂight at Buenos Aires. At this time, the Comets were averaging 10 hours a day in revenue service, a high level by any standards, and so the loss to the airline schedules was substantial. However, affairs kept on an even keel in 1961, which began by the welcome renewal of the United States operating permit in January.

On 14 March the airline ordered nine Avro 748 twin propeller-turbine airliners for feeder services, followed by three Sud-Aviation Caravelle twin- jets in August, for domestic trunk and regional routes. A point of interest in this latter purchase is that it was the ﬁrst sale of the French short-haul jet to be completed through the agency of the Douglas Aircraft Company, with which Sud-Aviation had concluded a marketing agreement.