My only memory of Braniff International dates back to the early days of my slide collecting hobby. In May of 1982 when I was in grade 12 and getting ready to graduate from high school, I was more interested in airlines, aviation, slide photography and collecting slides of airliners, than I was in boring school work. It was at that time that Braniff International went bust and all their planes were flown to Dallas and parked at the airport to await new buyers. 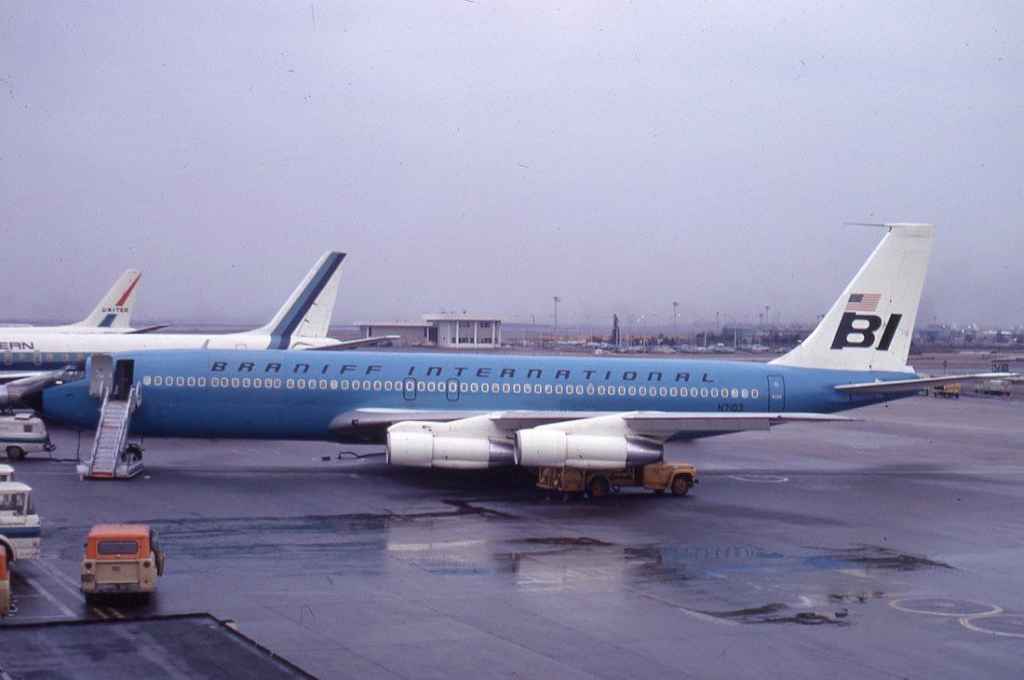 In the TV news reports they showed all the colourful Braniff Boeing 727s and DC-8s and I was amazed at how fantastic their colour scheme was, and was also very sad that they had gone bankrupt. I wanted to travel and photograph their colourful airliners and that was in my plans, but it was not meant to be unfortunately.

By the summer of 1983, I travelled down to California and Arizona on an aircraft photography trip with my good friend Vince Cottrell, and we visited the bone yard and storage facility operated by Evergreen International at Marana Pinal County airport, just north of Tucson. On the main ramp I remember there were several Braniff 727-200s parked in the airlines full colours, the dark brown chocolate scheme. So that was the only time I got to photograph Braniff airlines aircraft in the full colours. That summer I also photographed a brown Braniff 727-200 that was leased to Alaska Airlines and it operated for a short term summer lease as a hybrid scheme, which was kind of neat. Anyhow, I hope you enjoy this collection of Braniff International images that I have acquired from various sources over the decades of building my aircraft slide collection.

I decided not to include a detailed history of Braniff International because that appears in many places on the internet. So for me, it made sense to keep the history to a minimum and instead relate my personal connection to this great, iconic, US airline from yesteryear.

I would like to acknowledge many of the photos are from Clint Groves and his ATP slide service, as well as taken by Dr. John Blatherwick. Most of the Clint Groves shots were bathtub processed E-6, which he processed in his own bathtub back in the early 1970s before he started shooting kodachrome slides. CLICK HERE for more information about the late Clint Groves.