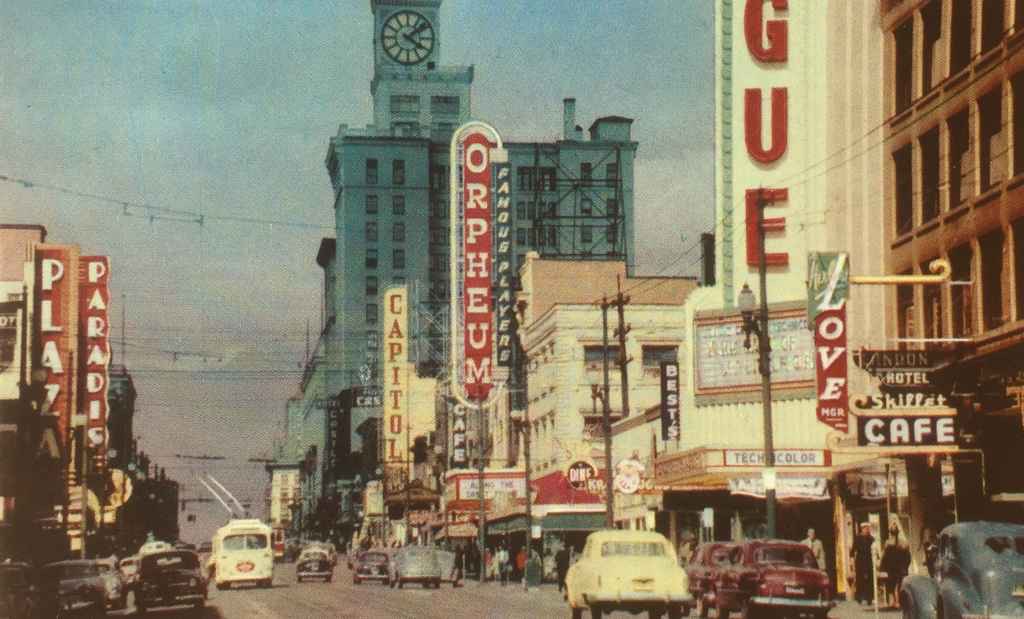 Granville Street Vancouver BC circa 1954. Photo was taken looking north in the heart of the city’s theatre district with numerous neon signs. This street is the main street of Vancouver and extends from West 70th near the airport, all the way to the wharf, a length of 10 miles. (Colour photo courtesy of Canadian Pacific Railway, post card published by Vancouver Magazine Services LTD.)

I recently stumbled across a small collection of old colour postcards I collected decades ago, depicting Vancouver’s vibrant theatre district of Granville Street and all the neon signed movie theatres of the day. From the movies in the theatre marquis, we can date the views to the period between 1953 and 1955.

It really was amazing just how many movie theatres dotted this prime real estate of the day. None of the theatres exist in their original form of showing feature films, but some lasted into the 1980s. The postcards show the Vogue, Orpheum, Capitol, Paradise and Plaza screens, with fabulous 1950s vehicles and brill buses, which remained in service with BC Hydro also until the mid 1980s.

Some of cards also show the north end of Burrard Street and the Vancouver Harbour, Coal Harbour, and the then prominent Marine Building, which was mentioned as the tallest building in the city on the caption of one of the cards. These images were probably taken from the higher floors of the Hotel Vancouver at Burrard and Georgia. The BC Electic building was built in the mid 1950s and displaced the Marine Building as the tallest building in the city.

The cards were published by several long defunct picture postcard publishers based in Vancouver, including Vancouver Magazine Services, Natural Color Productions, The Coast Publishing Company, Walker & Ward Scenic Cards and Grant-Mann Lithographers. I hope you enjoy these vintage views as much as I have over the decades of owning these postcards.

As a side note, I am a collector of old colour slides from the 1960s, 1950s and earlier. If you have any old 35mm colour slides, please do not thrown them away. I would be happy to preserve them for future generations, and can even supply you with scans of the best view with my compliments. So please contact me. I am specially interested in slides of aircraft taken in the 1950s and 1960s. 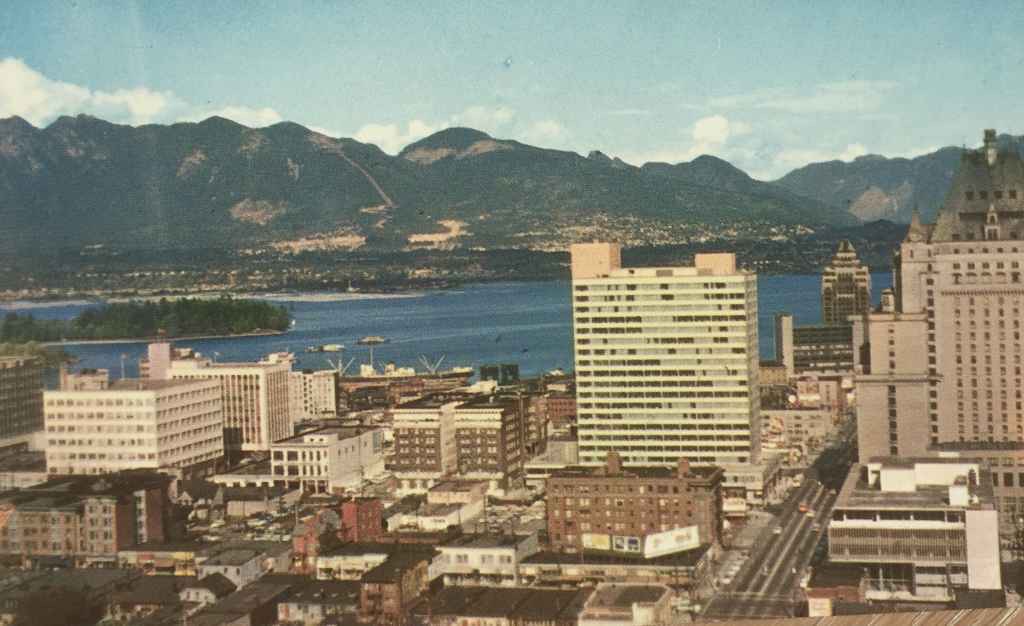 A bird’s eye view of Vancouver, BC looking north from the B.C. Electric Building, showing a portion of the downtown skyline. Vancouver Harbour and the North Shore Mountains in the background. (Plastichrome, Published by Natural Colour Productions Ltd., Vancouver, BC) 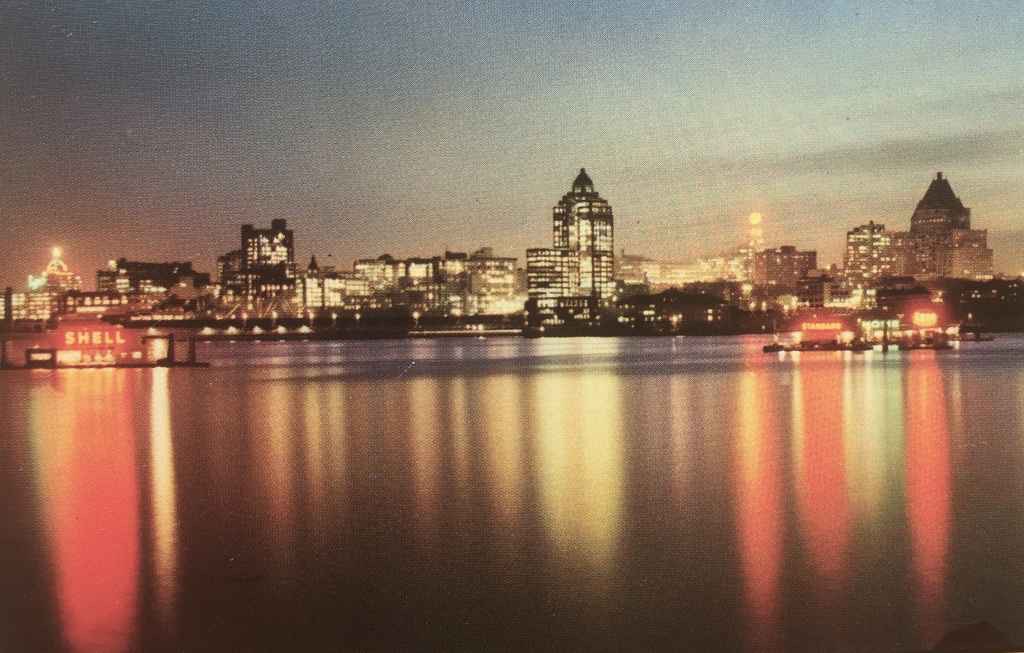 Vancouver, BC, Canada waterfront view at dusk circa 1954. (Kodachrome postcard published by The Coast Publishing Company, Vancouver, BC) 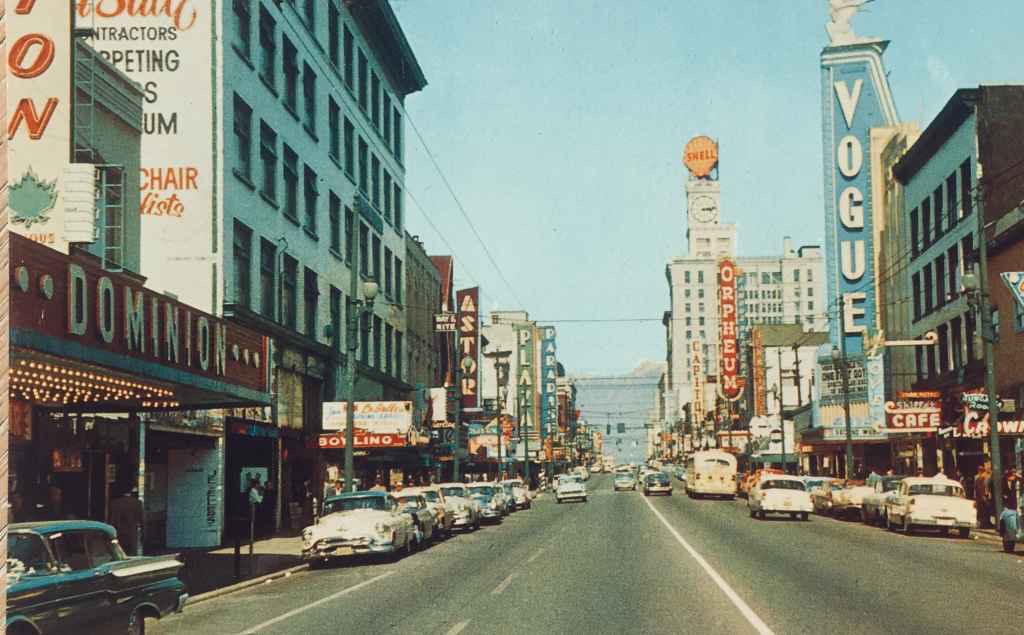 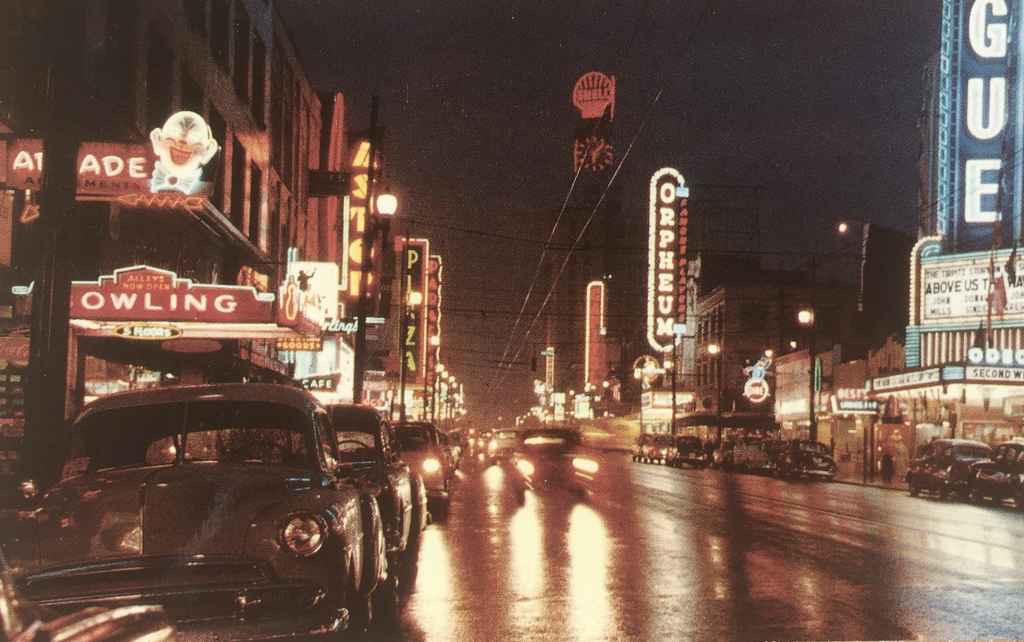 Night scene of Vancouver, BC, Canada, showing a portion of the theatre district. Vancouver is known for its high concentration of neon in the downtown area. We can date this image to 1955, the year the film “Above Us the Waves” staring John Mills was released theatrically. (Postcard published by Vancouver Magazine Services LTD., Vancouver, BC) 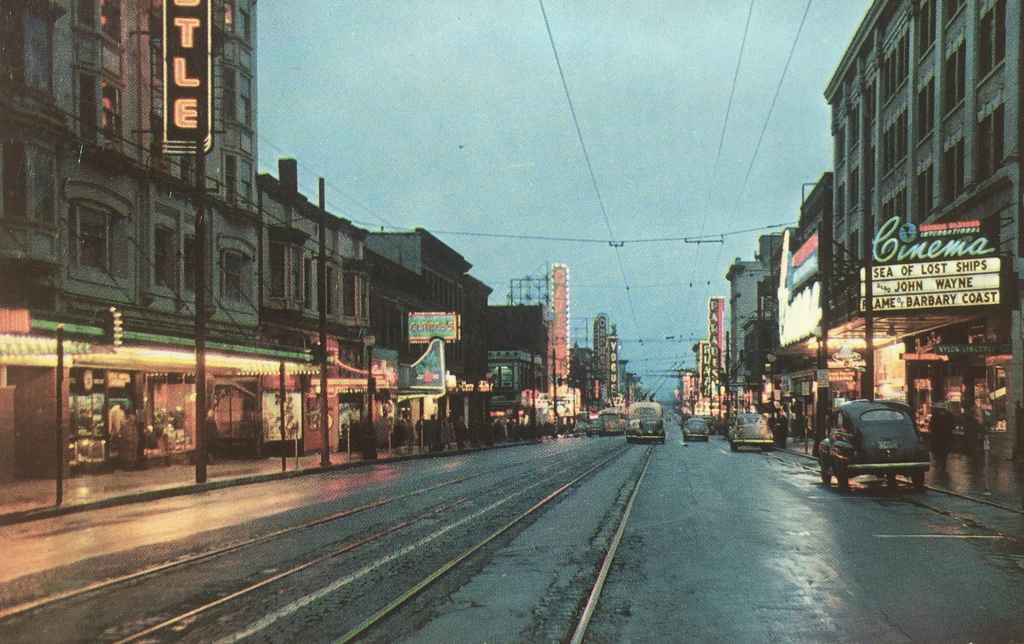 Granville Street looking south from Georgia with the Capitol Theatre, Famous Players theatre, Parades Theatre and the Plaza Theatre. We can date this view to 1953, the year of theatrical release of “Sea of Lost Ships” starring John Derek and Wanda Hendrix. (Published by Walker & Ward Scenic Cards LTD., Vancouver, BC, Canada) 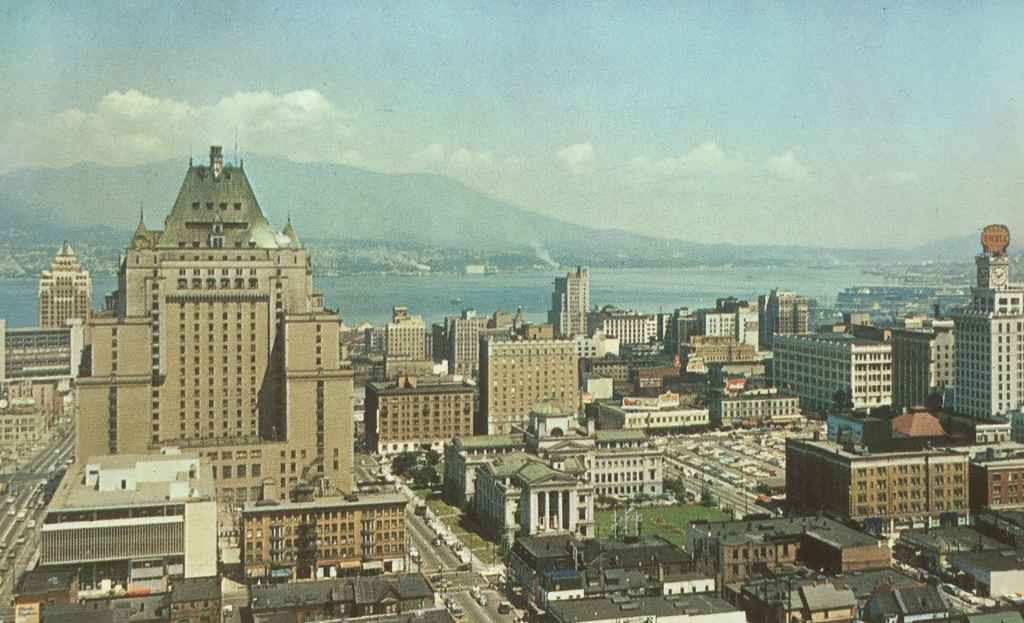 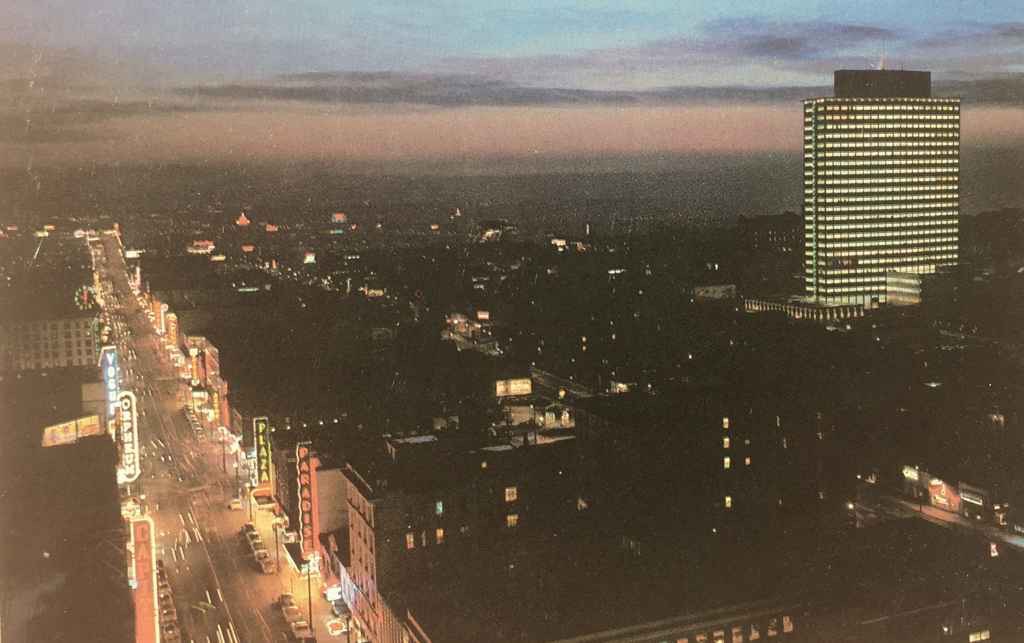 Dusk view of Granville Street looking south and the then new BC Electric Building circa mid 1950s. The BC Electric building was the new head office for the Vancouver based electric utility company in a modern 21 story, 285 foot high structure. (Rolly Ford photo, postcard published by Natural Color Productions LTD., Vancouver, B.C.) 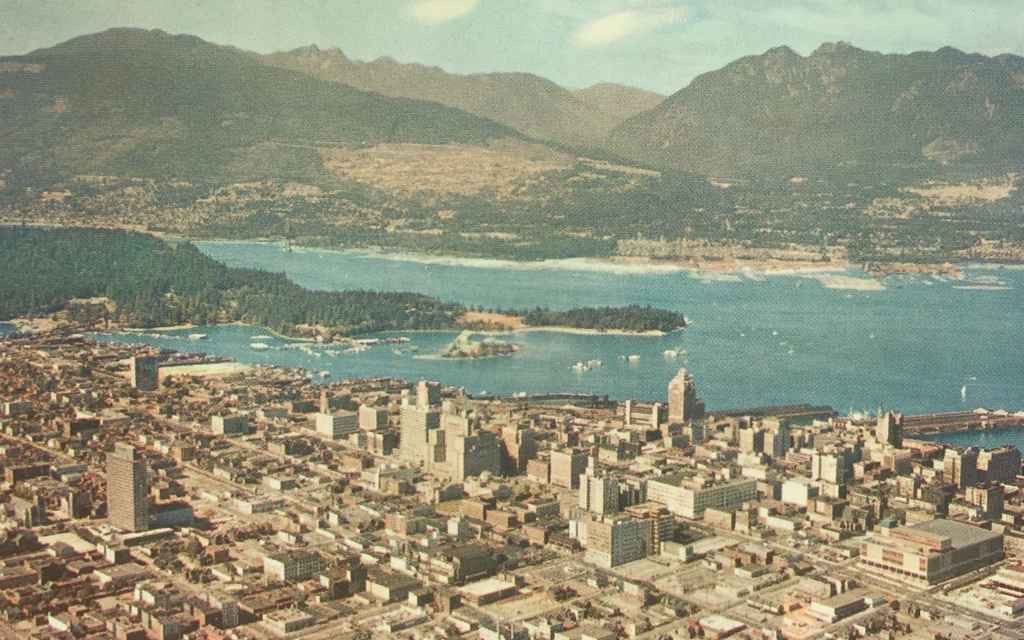 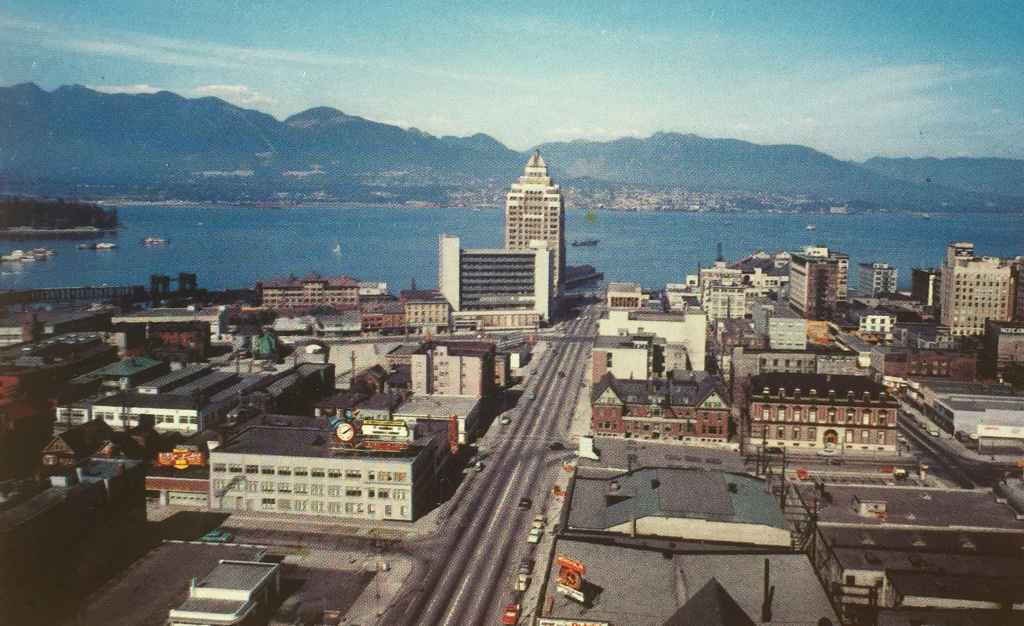 The Customs and Marine Building on the waterfront at the north end of Vancouver’s Burrard Street, stands majestic against the city’s vibrant harbour. Notice how empty the now traffic clogged Burrard street was in the mid 1950s! According to the caption on the back of the card “The North Shoreline Mountains are snow-covered most of the year and form excellent skiing grounds. Two electric ski lifts make this ski playground famed throughout the Northwest.” (Postcard published by Vancouver Magazine Services LTD., Vancouver, B.C.) 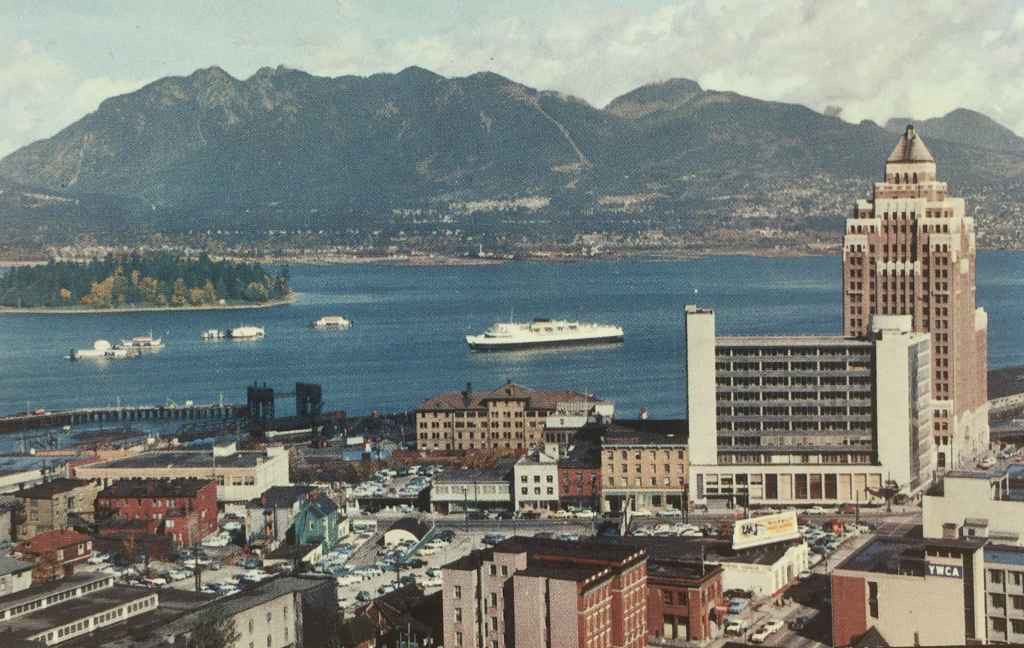 Another view of the Customs and Marine Building on the waterfront at the north end of Vancouver’s Burrard Street, with the YMCA in the lower right of the image. Notice all the available ground level parking lots that were available back then. (Kodachrome Postcard published by The Coast Publishing Company, Vancouver, Canada.) 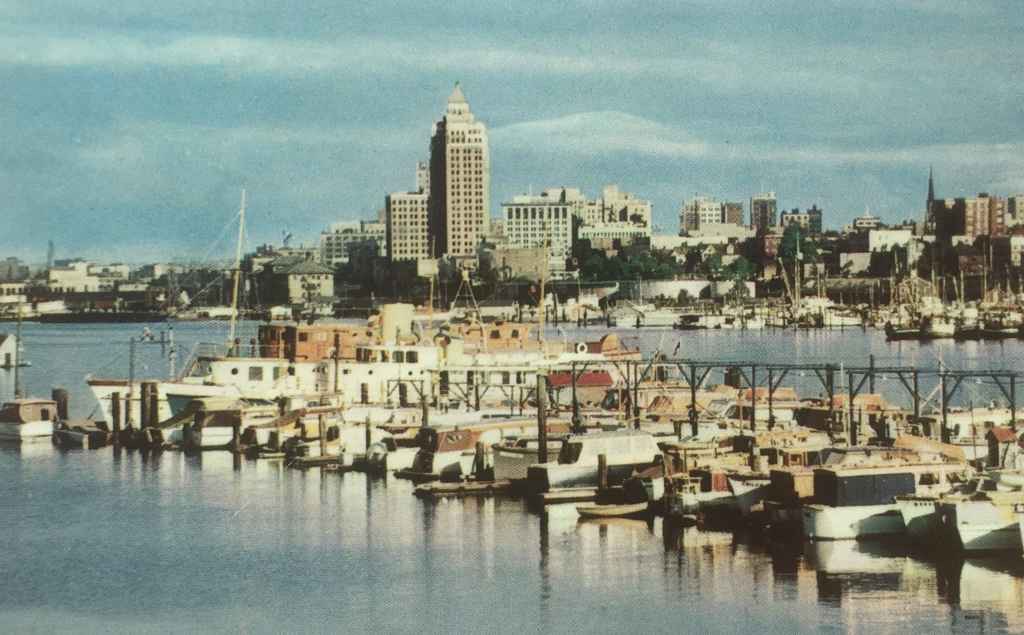 Vancouver Waterfront Coal Harbour as viewed from Stanley park circa 1954. In the foreground are boats belonging to the Burrard Yacht Club. In the background can be seen the prominent Marine Building, the then tallest building in Vancouver. (Postcard published by Vancouver Magazine Services LTD., Vancouver, B.C.) 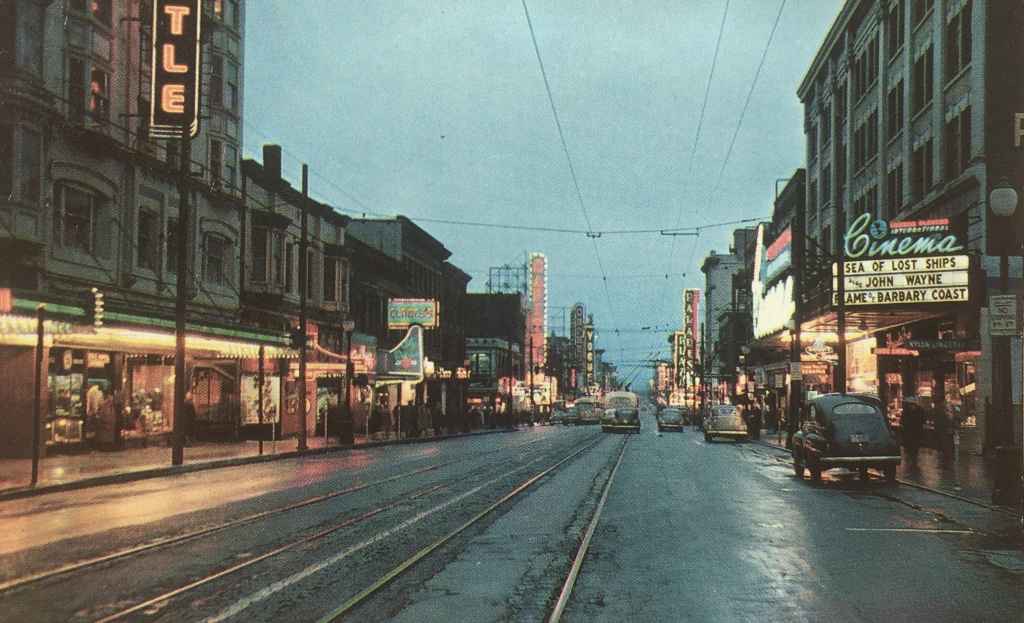