The RCAF DC-4M2 North Star replacement commenced in 1961 with the introduction of the CC-106 Canadair Yukon (military version of the CL-44) transport aircraft. This four engine turbo prop was powered by 4 Rolls Royce Tyne engines and was a derivative of the early Bristol Britannia aircraft which had already served in Canada with Canadian Pacific Air Lines. 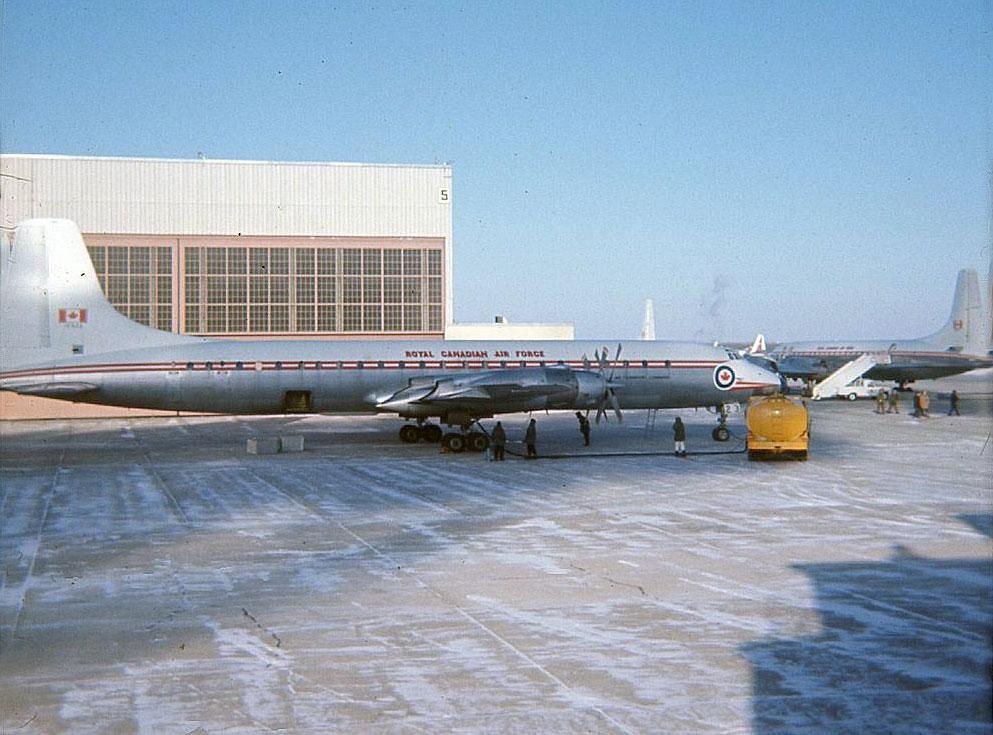 The Canadair CC–106 Yukon was pressurized and could carry 134 passengers plus a crew of 10 and was the largest aircraft in Canada at the time it was introduced to service. Twelve Yukons served with the RCAF during a decade of accident free service on military troop transport, cargo and VIP government duties both within Canada and abroad.The Yukons were replaced with a fleet of 5 new Boeing 707 jetliners that were originally ordered by Western Airlines and not taken up from the Boeing factory, so the Canadian Government purchased the jets.

Two of the RCAF Yukons 15929 and 15932 that were configured as VIP transports and were used for Government work and based at Ottawa Uplands airport opertaed by RCAF 412 Squadron. The other ten RCAF Yukons were based at CFB Trenton.

The RCAF Yukons were retired and placed in storage at Saskatoon airport during 1970 and 1971 to await onward buyers. Most the RCAF Yukons were sold to aircraft brokers in Miami and continued their flying in the form of cargo haulers for airlines based in Central and South America.

The RCAF CC-106 Yukon fleet was as follows:

We hope you enjoy the RCAF Canadair CC-106 Yukon images taken by Dr. John Blatherwick. Thank you very much for visiting this page, and enjoy!