The RCAF Fleet of a dozen CC-106 Canadair Yukons were replaced with a fleet of five Boeing 707 intercontinental jetliners, which were originally ordered by Western Airlines. The Boeing 707s were delivered in 1970 and the Yukons were retired in 1970-1971 and placed into storage for onward sale at Saskatoon airport. 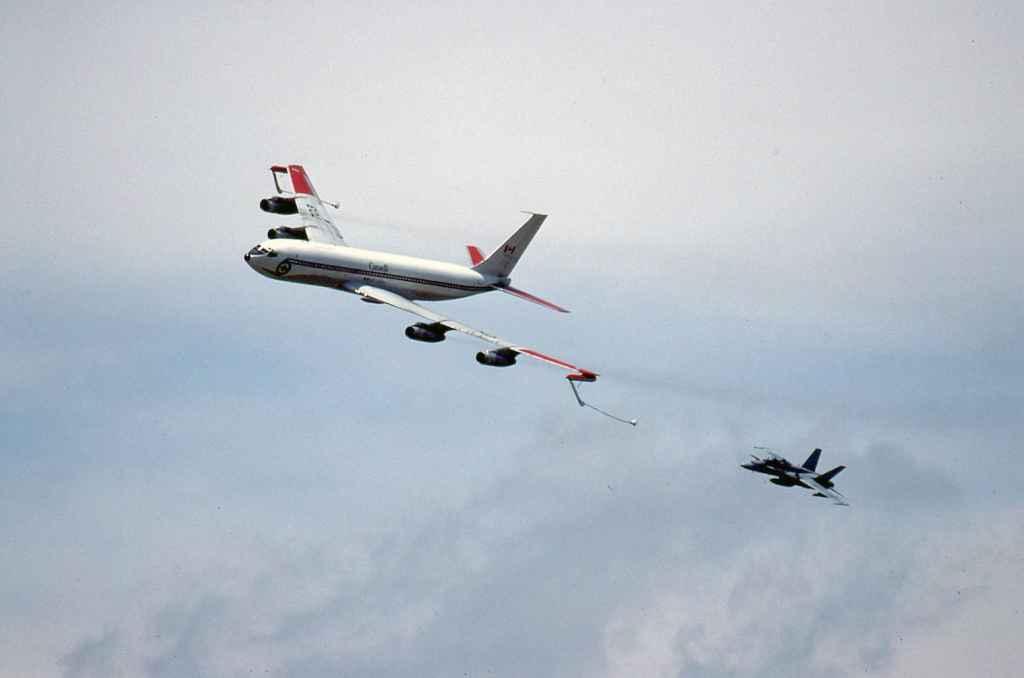 From the start, the Canadian Forces Boeing 707s were used on the military’s trans-Canada thrice weekly milk-runs as well as on regular trans-Atlantic flights between CFB Trenton and Ottawa Uplands with the CFB base in Lahr, Germany. The 707s also served as government and VIP transports.

From the outset the Canadian Armed Forces Boeing 707s were configurable as air-to-air tankers and were used to take fighter jets between Canada and Europe on an ongoing basis. The CF5s and CF18s were routinely refuelled from these aircraft, during times of peace and during times of war.

The Canadian Forces Boeing 707 was frequently used by Prime Minister Pierre Elliot Trudeau on his overseas travels, notably on his visit to Red China in the early 1970s. The 707 served Canada’s military contingent based at Doha, Qatar during the Gulf War in the early 1990s, as well as during Canada’s peace-keeping duties during the Yugoslav – Bosnian conflict of the mid 1990s. All in all the fleet of five Boeing 707s had a stellar service record with the Canadian Armed Forces during their quarter century of service, up until their sale to the US Air Force as J-Stars surveillance platforms in the mid to late 1990s.

We hope you enjoy the Canadian Armed Forces Boeing 707 CC-137 images taken by Dr. John Blatherwick. Thank you very much for visiting this page, and enjoy!