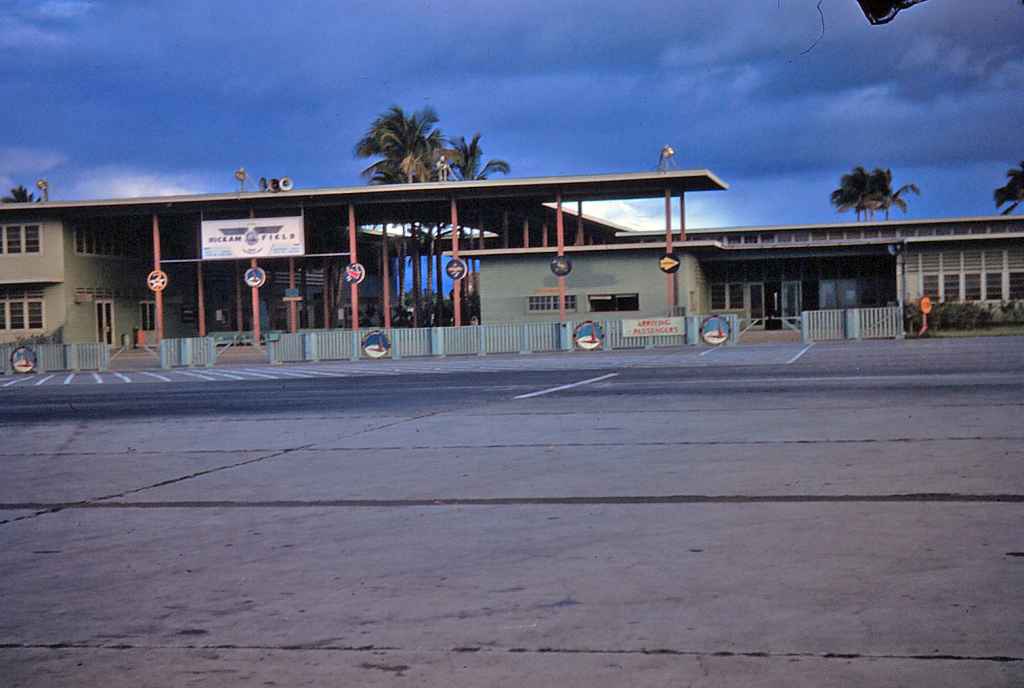 This is the arrival terminal building at Hickam Air Force Base as seen in the 1940s and early 1950s.

Hickam Air Force Base in Honolulu rose to prominence in public awareness after the Japanese attacked the US military installations at Pearl Harbour and the nearby airfields on Oahu, in the Hawaiian Islands. The attacked occurred on December 7, 1941, a “date which will live in infamy” as famously proclaimed by US President Roosevelt, and from that day to current times, Hawaii (and Guam to a much lesser extent) remains as the western most homeland base of deference against attack from unfriendly forces that may originate in the Pacific. Which unfortunately, even today is a worry in the ever changing dynamics on the Korean peninsula.

After the end of World War II, large inventories of aircraft that were built for the war effort were kept on hand based at Hickam Air Force Base, near Honolulu in the Hawaiian Islands, as American would never again let her guard down in this all important theatre. Although the US forces remained in Japan after the end of the war, to oversee the democratic rebuilding of that country, military supplies and personnel that were transported by air from the continental United States, would use Hawaii as a rest point during the long, trans-Pacific air journey. Of course, propeller driven aircraft of 1940s and 1950s simply did not have the trans-Pacific non-stop ranges that we take for granted today, that are matter-of-fact with current jet airliners.

As a collector of 35mm colour aircraft slides going back to the early 1980s, I recently acquired some vintage colour 35mm kodachrome original slides taken during the 1940s and 1950s that were taken at Hickam Air Force Base. The images and colours have retained their brilliance and have been preserved quite remarkably against fading, despite their age. This is evidenced from the scans of the images, as presented below. Sadly, I do not know who took the slides as there is no photographer name indicated on the slide mounts. That said, many thousands of US servicemen and related family members and support personnel transited the Hawaiian Islands during this fascinating post war era. It was not only Japan and other US allies such as the Philippines and Korea that were within the US sphere of influence, but it was also at this time that the US military was engaged in nuclear weapon testing (above ground atmospheric detonations) in the South Pacific. And much of the logistical support for these tests was staged via the Hawaiian Islands.

Aircraft that were prevalent at Hickam during this interesting time frame consisted of prop driven transport planes such as USAF MATS (Military Air Transport Service) Douglas C-54 Skymasters, Boeing C-97 Stratocruisers, Douglas C-47 Dakotas, Curtiss C-46 Commandos, and Fairchild C-82 Packets and C-119 Flying Boxcars, many of which were locally based at Hickam, whilst others were transient visitors. And of course there were fighter attack aircraft also based at Hickam, which is evidenced by these historic views of the Hickam apron loaded with rows of both Republic P-47D Thunderbolts and Curtiss SB2 Helldivers. 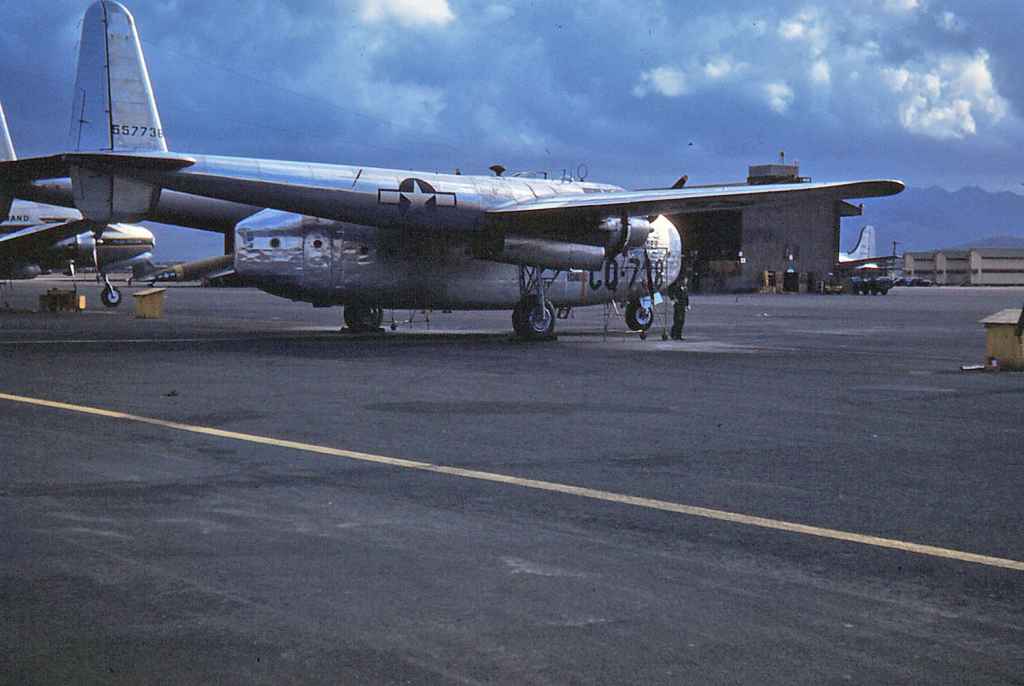 US Air Force Fairchild C-82 Packet 557736 is serviced on the ramp at Hickam Air Force Base in Honolulu, Hawaii, circa early 1950s. 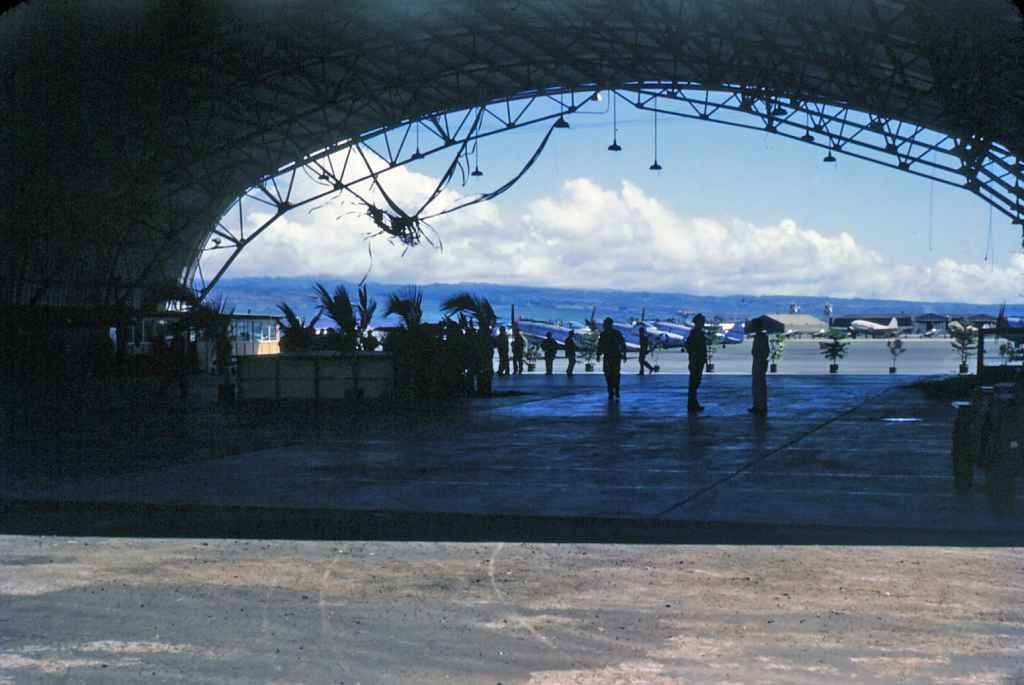 A view to the active dispersal apron, loaded with USAF Republic P-47D Thunderbolts, also referred to as “jugs” because of their jug-shaped fuselages. 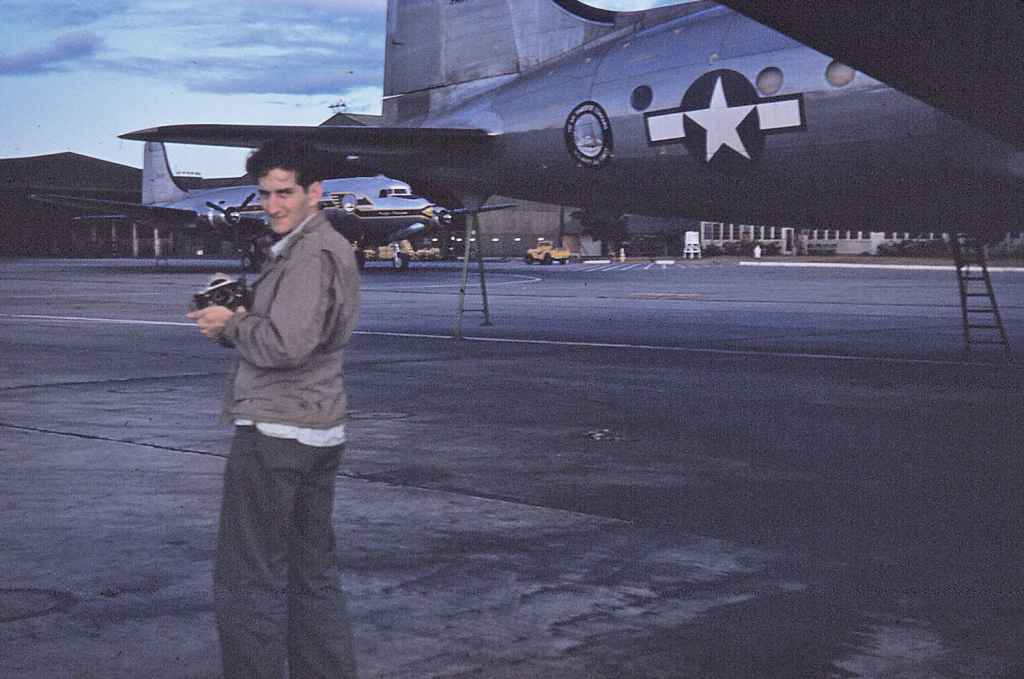 This young fellow was a keen aircraft photographer back in the early 1950s or late 1940s. He seems to be holding a fairly nice camera for the day. It is shame we do not know his name, as he might very well be the fellow who took all the images presented in this report. We are grateful for his efforts so that we may enjoy these images of how things were, some seventy years ago. 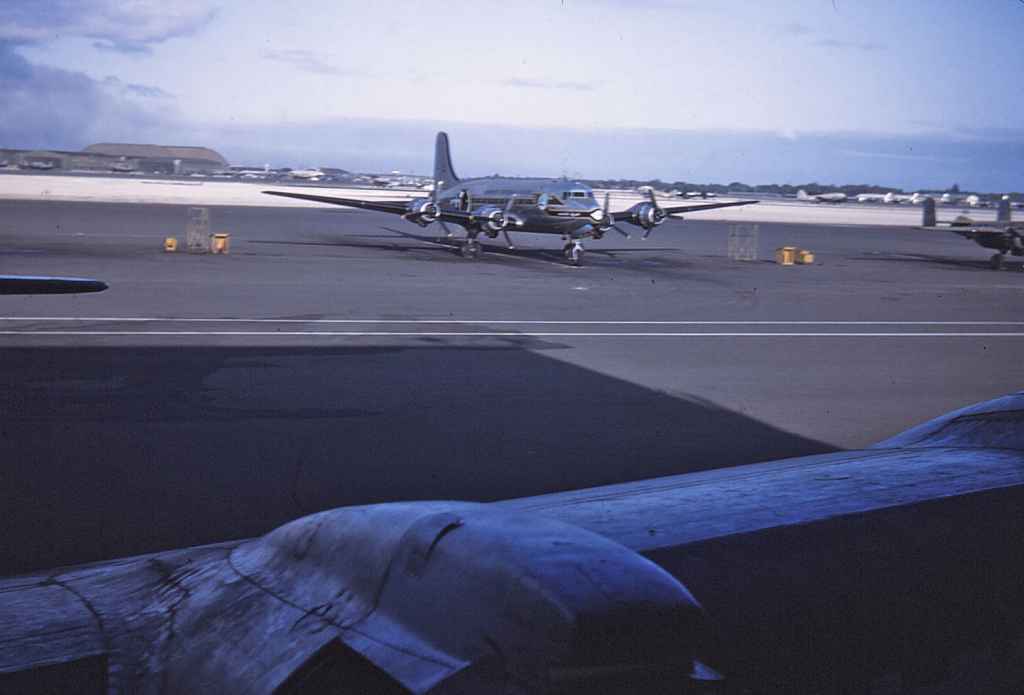 A USAF MATS Douglas C-54 Skymaster at rest on the Hickam apron, as viewed through the forward crew door on a sister Douglas C-54. Circa early 1950s. A very busy and well protected Hickam apron, circa mid to late 1940s. We have rows of Curtiss SB2 Helldivers, as well as rows of Vought F4U Corsairs (left side). Hickam Air Force Base transient apron circa early 1950s. We have a Pacific based USAF MATS C-97 Stratocruiser, with a serviceman and his wife or girlfriend seen in lower centre frame. The flower lei on the woman is a Hawaiian tradition that dates back generations. 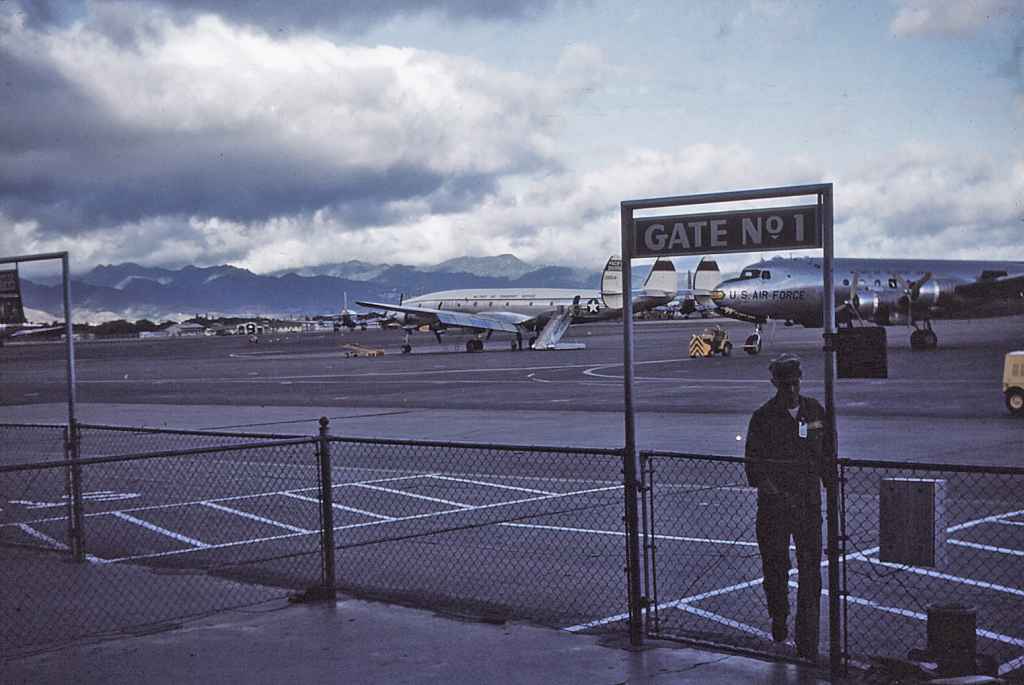 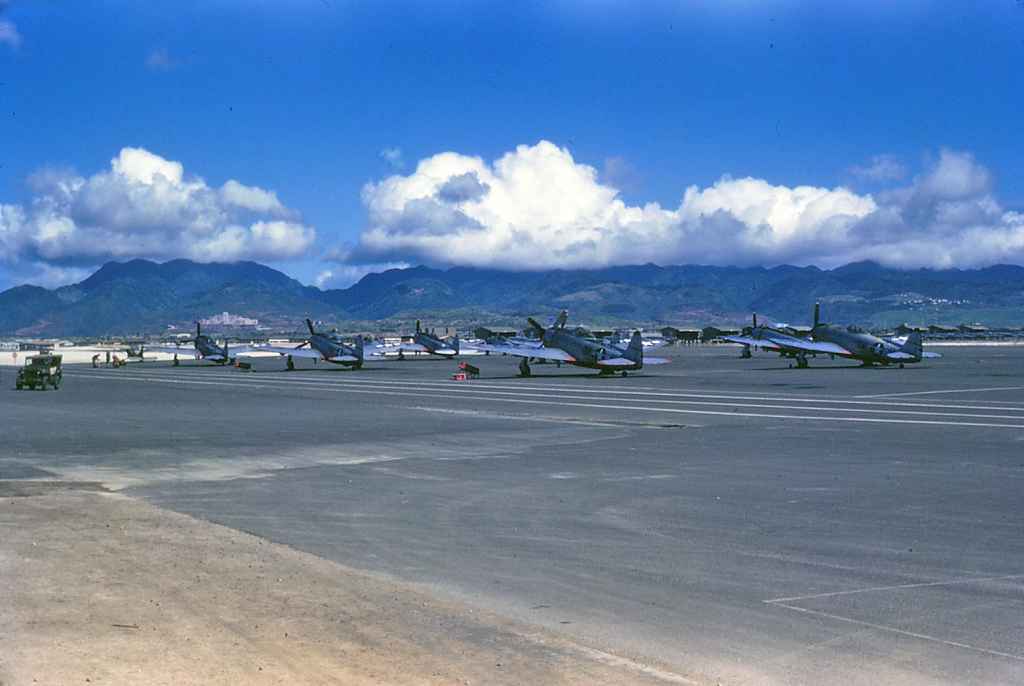 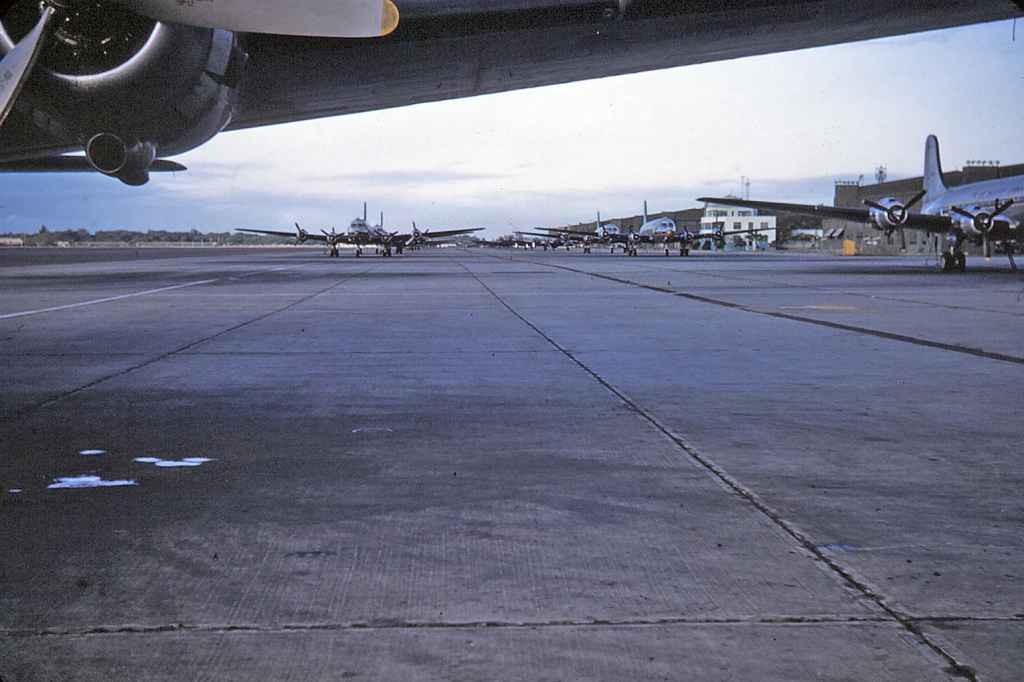 Another fine view of the Hickam AFB transient apron, which is teaming with Douglas C-54 Skymasters. Hundreds of these were built for the war effort, and after the war, the US military had a huge inventory, which were luckily still on strength and available to support the supply efforts of the Berlin Airlift. It is very possible this image taken of the Hickam apron dates prior to the Berlin Airlift, just based on the large number of locally stationed aircraft. During the Berlin Airlift, many of these aircraft were re-assigned to Europe. 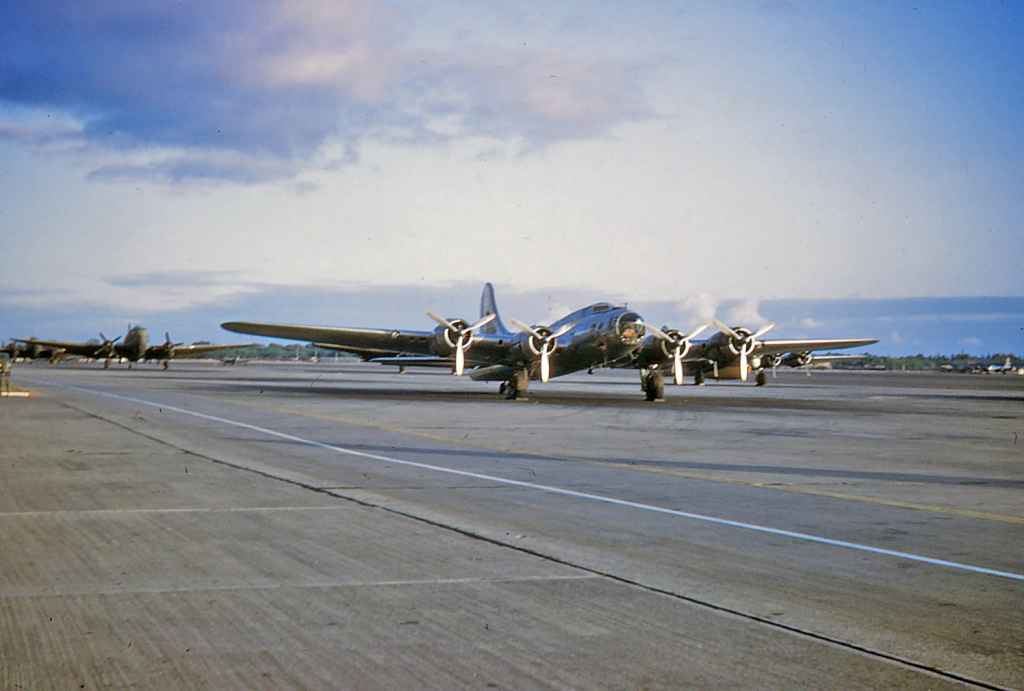 Hickam was naturally a major repair facility for the US Air Force, as seen by these open-air maintenance sheds, which remained at Honolulu as prominent fixtures well into the 1980s. This early 1950s image shows USAF MATS Douglas C-45 Skymaster 49033. The “Hickam” title on the tail denotes that this aircraft was locally based. Looking good!USAF MATS Boeing C-97 Stratocruiser 0694 has just arrived either from the West Coast or the Far East. Her passenger door is open and she rests at Hickam’s “Gate No 1” in this period early 1950s kodachrome view.