It is our pleasure to present the following guest blog post and photos by our good friend Ron Kosys.

If you enjoy this article, please take a second to share it on Facebook or Twitter (using the share buttons on this page) so other people can benefit as well. Now to Ron’s article:

Fitted in amongst the work I’ve been doing for the Propliner Annual are a few scans from the VERY early years of the Kosys Travels and Archive. I get totally embarrassed when I look back at my early stuff.

But then again the quality of my equipment was = totally naff.

I did have an excuse – I was young. Money was in short supply in those days as you started out in your working life, unlike today’s younger generation who seem to start at totally surreal annual salaries compared with our pay of all those years ago.

Colour slide film was also expensive, so it was mainly one shot of a subject at a time and hope and pray that when your film arrived back from processing, the images were sharp (comparatively, allowing for the vagaries of the available film, all with their various traits, advantages, disadvantages etc) .. and correctly exposed.

Cameras and lenses were also very expensive compared with those available today, delivering images that overall quite simply do not compare. Yes things have changed!

Anyway, on to the rubbish, from the days when aviation was really interesting, with airliners manufactured by a darn sight more than just four or five companies (could that be today???) ….

A Delta Convair 880 at New York JFK in 1973. Shot on Fuji 100 using a Mamiya 35mm body and a 135mm of unknown inferior quality. Taken from the car park above the Delta terminal that in those days offered clear views over taxiways and the whole of the International Arrivals Building, where all foreign arrivals ‘arrived’. 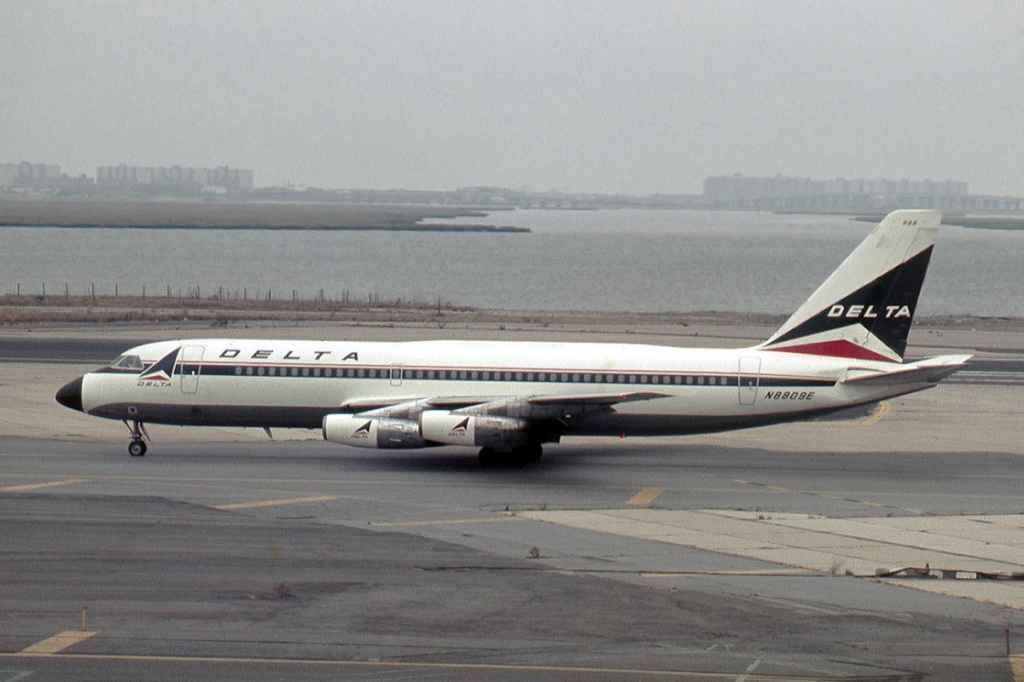 Two of the five Delta DC10s taken at New York La Guardia on the same trip, from the simply fantastic completely open viewing deck. Delta had 5 Dc10’s leased from United at the time, and all 5 operated through La Guardia daily. N604DA waits for N603DA to depart so it can use the same gate.

Delta ordered five DC10’s as an insurance policy against the Tristar project being cancelled due to the Rolls Royce insolvency. When Rolls Royce was rescued, Delta sold the DC10’s to United and leased them back until the Tristar fleet was sufficiently large, although a further fleet was later operated in the late 1980s after Delta had taken over Western. 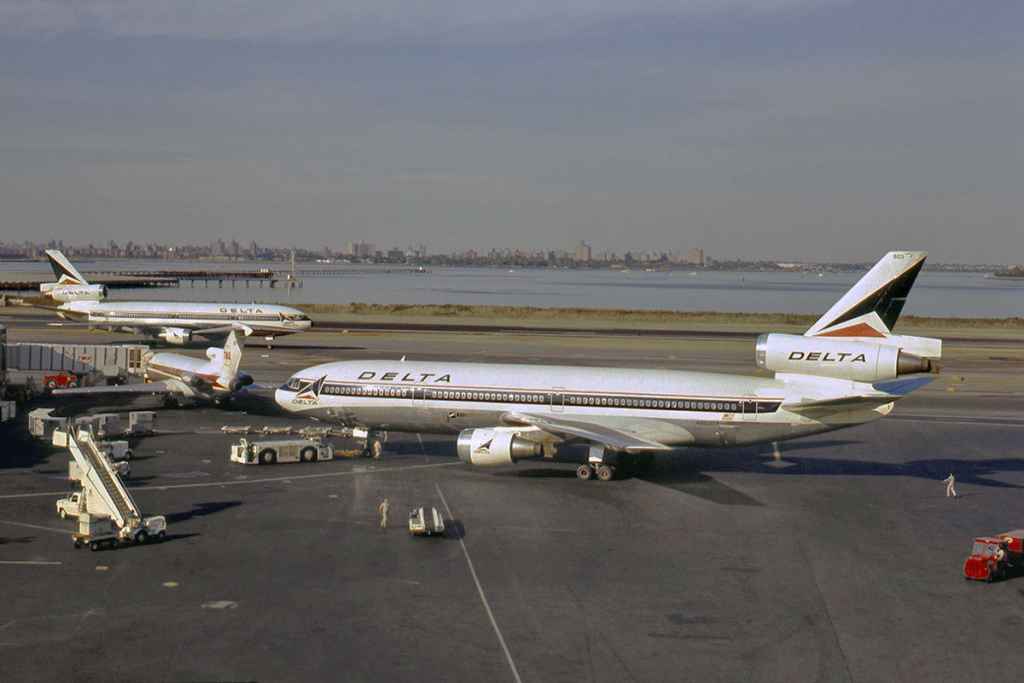 Inspired by a most spectacular slide taken at Vientiane, the capital of Laos, that shows a Royal Air Lao Convair 340, Viscount and Caravelle, which should appear in the
Propliner Annual. Eighteen months later found me in the Far East. I spent some enjoyable time in places such as Bangkok, Hong Kong and various places in Japan, all before visits to such places became fairly common.

My ‘illegal’ trip into Cambodia was possibly the daftest thing I have ever done….Remember, the Vietnam War was raging at the time, and visiting Laos and Cambodia was difficult as they were technically closed to visitors, unless you were a US ‘advisor’ but they ‘didn’t’ go there as there was no ‘war’ other than in Vietnam.

Bangkok airport just could not cope with modern jets and there was plenty of activity by operators such as the CIA-backed Air America supporting the US who of course were not in Laos or Cambodia. 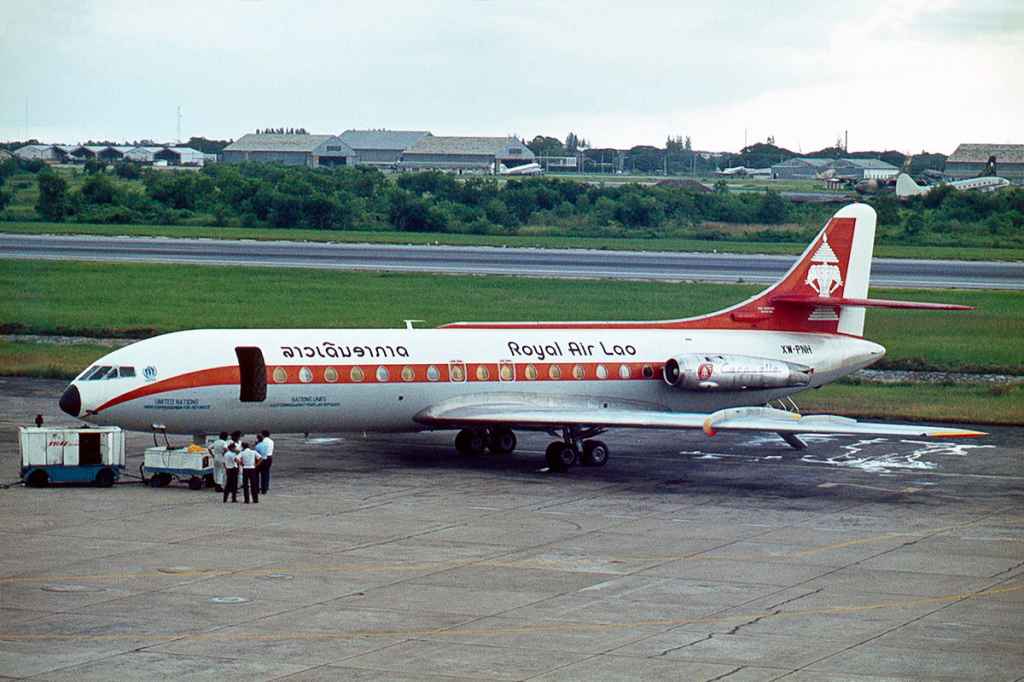 Royal Air Lao Caravelle XW-PNH on the apron at Bangkok 1975. Note the various C46s, C123 Provider and DC3s in the background. Photo by Ron Kosys.

Also based there at the time was the Royal Air Lao Caravelle – almost certainly the aircraft on the ‘Propliner’ slide. This carried additional ‘United Nations High Commissioner for Refugees’ titles and seemed to fly almost daily, certainly the days when I went out to the airport. The taxying shots were taken with a standard lens off the little viewing deck that existed at that time. 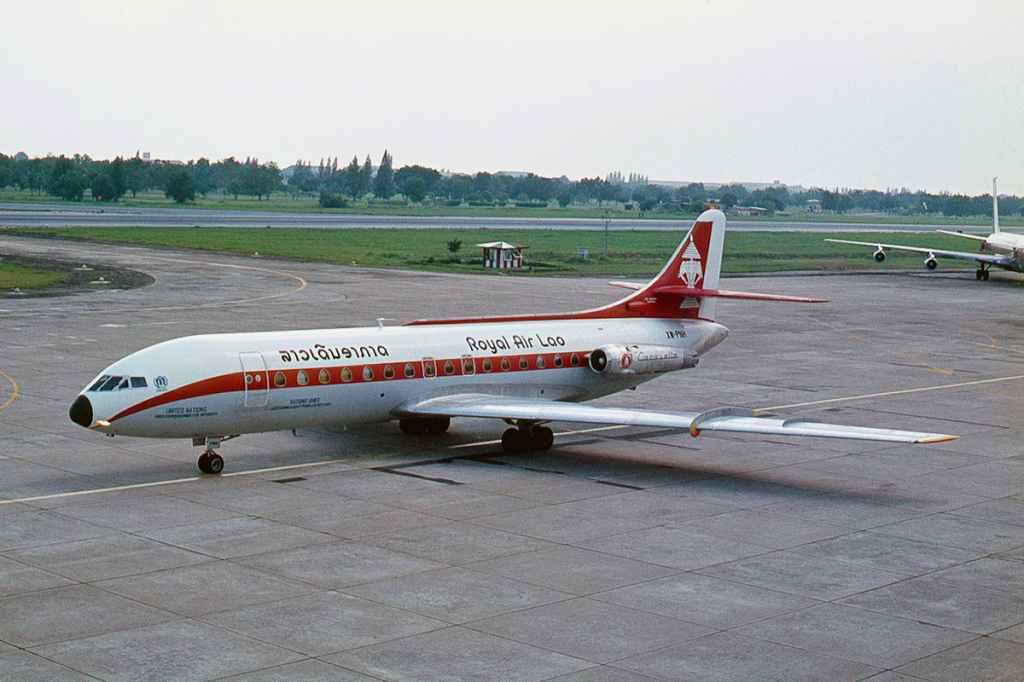 This time I was using CT18, which had better colour balance, particularly in cloud, but still unfortunately wasn’t the sharpest. If anything was parked on the stands opposite the deck – which was the usual place for the Thai Airways 748’s to hang around – aircraft with a larger wing-span than the Caravelle had to re-enter the runway for a short distance to reach the parking stands further to my left.

The quality of the slides might not be the best but just look at the aircraft types: the Caravelle; the 707 was Alia (now Royal Jordanian of course); the Transmeridian CL44 (this one had operated as VR-HHC in this one-off colour scheme [it’s then sister company’s BAF – British Air Ferries] for a short while, and ironically a few years operated once again as VR-HHC for Transmeridian Hong Kong but in the standard Transmeridian scheme of the time).

And lastly the Air Ceylon Trident. If I remember rightly, this sole aircraft in their fleet operated through Bangkok twice weekly, each time involving a nightstop.

So, naff images they might be, but the memories … 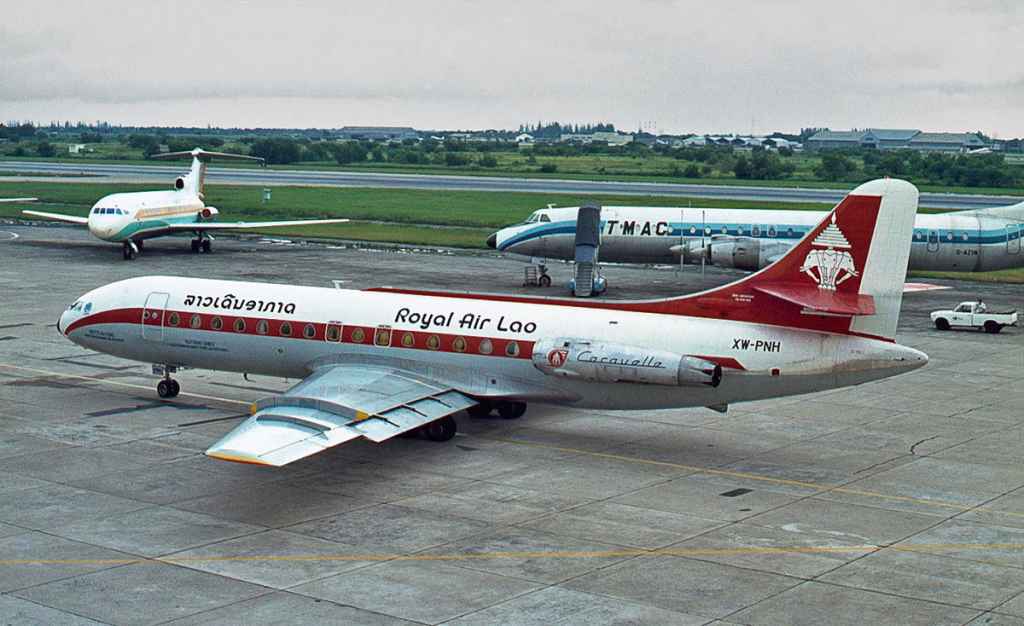 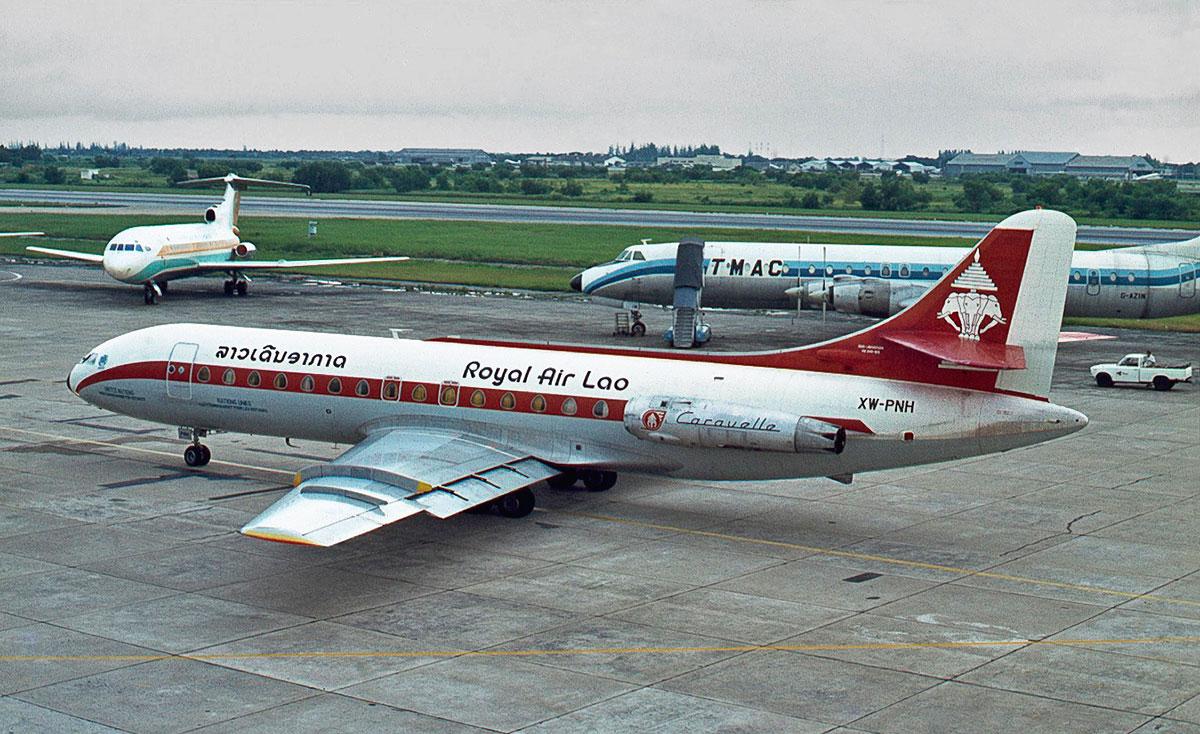 Article Name
Royal Air Lao Caravelles and other 1970s aviation photography memories by Ron Kosys
Description
Inspired by a most spectacular slide taken at Vientiane, the capital of Laos, that shows a Royal Air Lao Convair 340, Viscount and Caravelle, which should appear in the Propliner Annual. Eighteen months later found me in the Far East. I spent some enjoyable time in places such as Bangkok, Hong Kong and various places in Japan, all before visits to such places became fairly common.
Author
Ron Kosys
Publisher Name
Henry Tenby
Publisher Logo 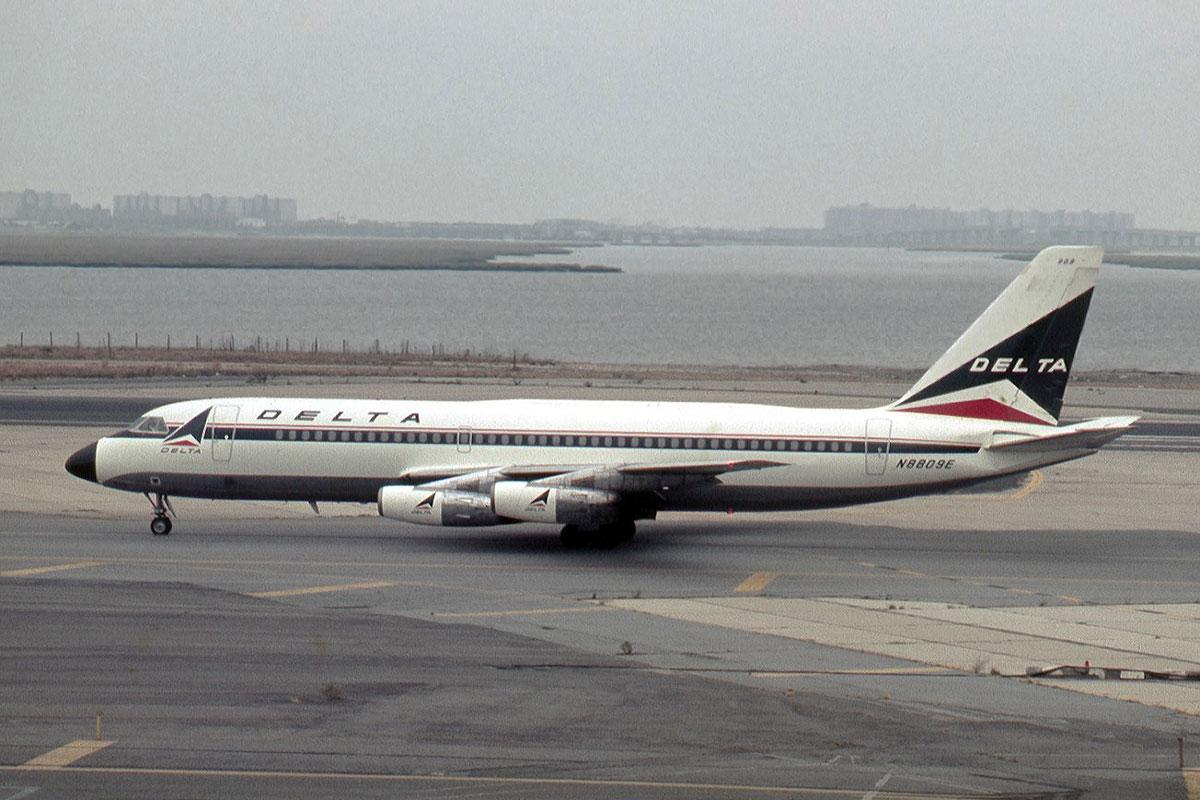