On November 14, 1978, aviation photographer Ron Kosys had the good fortune to be in Cape Town, South Africa, and happened up the once-in-a-lifetime opportunity to fly on a Court Line S-61 as an observer during a non-scheduled maintenance flight to a super tanker.

If you enjoy this article, please take a second to share it on Facebook or Twitter (using the share buttons on this page) so other people can benefit as well. Now to Ron’s article:

A little over 37 years ago (gulp), I had just returned from making my first visit to South Africa. Although finding even the slightest thought of apartheid abhorrent in the extreme, I was drawn to a country that still used the steam loco and had a fantastically varied mix of civil aircraft that included the now ‘classic’ British airliners such as the 748, Viscount and 1-11.

The Air Malawi VC-10 also visited Johannesburg twice weekly. Although photography wasn’t officially banned by the regime at that time, it was never really clear what you could and what you couldn’t photograph. Only one way to find out.

After Johannesburg and Kimberley, the next stop was Cape Town. Steam still shunted the docks and somewhere hidden within the vast area was a heliport from where Court Line operated a S61. Yes, this was ‘the’ Court Line, the British airline that had really given me a buzz with their brightly painted 1-11’s and Tristars.

I flew on both of their Tristar’s to the Caribbean, where I photographed the similarly painted 748 aircraft and flew on two of the Islanders of their LIAT (Leeward Islands Air Transport) subsidiary just before they went bust in 1974. 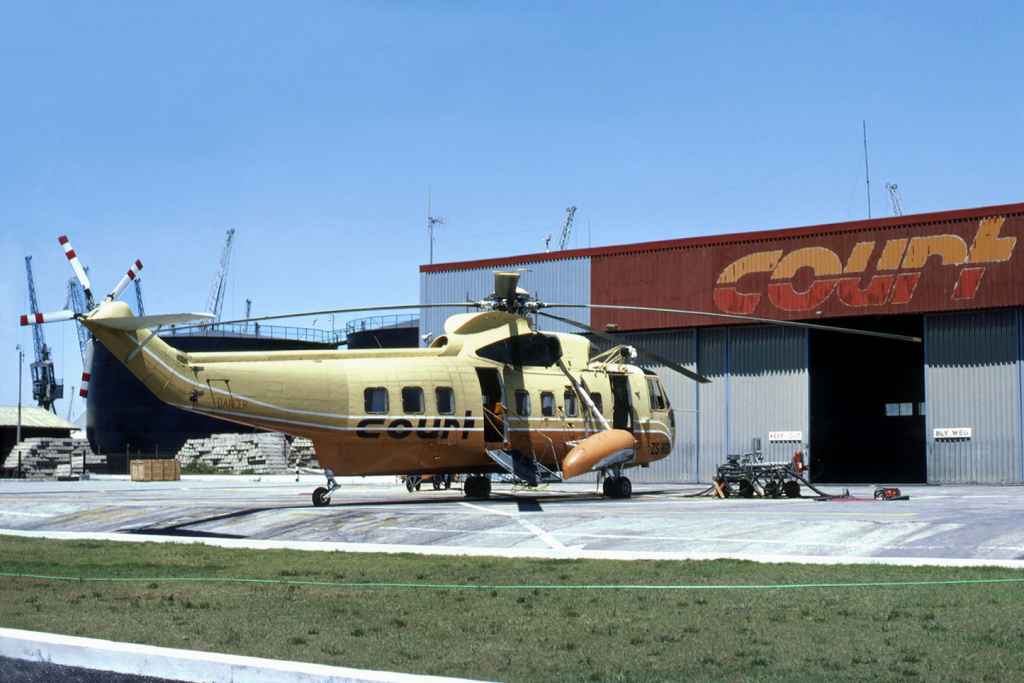 The operation in South Africa was sold off but retained the Court Line name and corporate scheme. Unlike the main UK operation whose aircraft were painted in three shades of a colour, Court Line South Africa operated a fleet of S61s, Alouettes and Jet Rangers in what was officially called ‘yellow’. The parent company and LIAT both had aircraft painted in three shades of ‘yellow’, ‘pink’, ‘tourquoise’, and my favourite ‘lilac’.

Wandering through the docks with camera in hand (with no problems whatsoever on the photting front at least up to this stage), the distinctive sound of a S61 was heard and indeed one lifted off and headed out to sea.

On arriving at the heliport, the question was asked about photography. ‘Sure, no problems. Take what you want, but don’t photograph elsewhere in the docks. They’re not happy about it’. Ooops. I didn’t tell him about the many steam locos I had photographed up to this point. 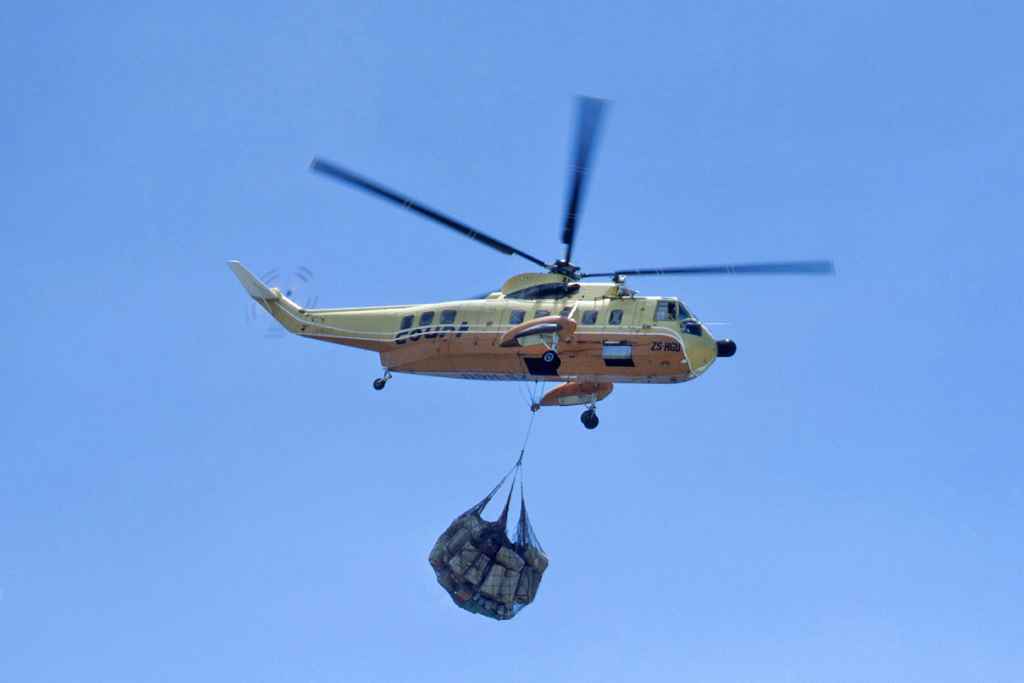 Court Line serviced super tankers and the like as they rounded the Cape from their heliport in Cape Town docks, making any number of trips to each ship supplying them with fresh food (including cabbages!!) and ships spares, most of which had been booked a few days beforehand, mostly delivered in nets slung under the helicopter. This kept one S61 busy 7 days per week… photting it kept me busy for a couple of hours!

The inevitable conversation develops, where are you from etc etc. I mentioned my love for the original Court Line group. Myself and my travelling companion were asked how long we were around for and whether we were interested in a flight. Bit of a bloody daft question isn’t it if you really think about it. There was a single flight that night and a ‘different’ one in the morning if we wished.

The flight that night would be in the dark and although it sounded attractive the flight in daylight seemed preferable. Although I’d flown the S61 previously (BEA Helicopters to and from the Scillies, and New York Airways), this one sounded something REALLY special. 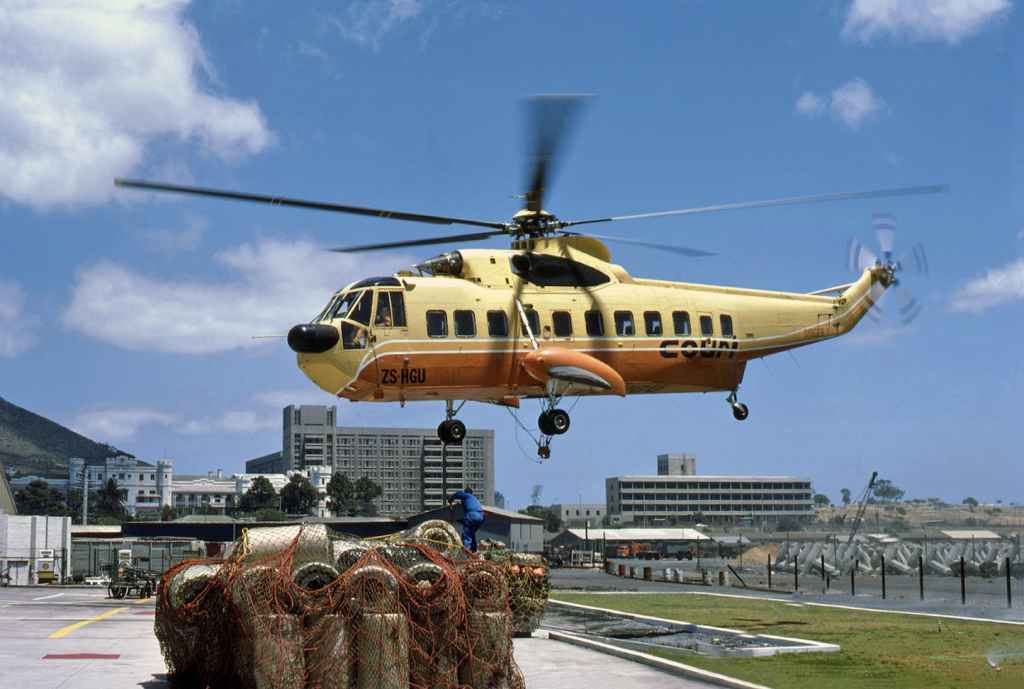 Chevron’s MV L.W Funkhouser, a super tanker of 268232 tonnes deadweight built in 1974, had developed a fault and an engineer was being flown out to it. Consequently, the helicopter was going to land on the ship, and drop the engineer off to assess the situation. We would then have to wait for an unknown period whilst it was determined if it was a quick fix; if additional spares were required etc etc.

To make the trip a little more interesting, the prevailing winds might prevent the S61 from landing. In the event, we did land after a 38 minute flight out from Cape Town; the S61 then shut down whilst we awaited news. One small disappointment was we were not allowed off the helicopter for a few snaps – now that really would have been something !! Understandable really.

I cannot remember how long we had to wait but news came through the engineer was going to remain on the ship and the S61 was going to have to do a follow up trip to deliver the required spares and no doubt collect the engineer.

As the ship was still sailing towards the Cape and therefore getting closer to Cape Town, the return flight was only 28 minutes. What an experience ! All it cost us was the purchase of a few Court Line tee shirts !!!

We were ‘staggered’ to also find out that the offer of flights was actually BOTH, and they had waited a further 10 minutes the previous evening in case we had had a problem accessing the docks. Insert suitable swearword here!

This trip must rank as one, if not the, highlight of my flying ‘career’. It was something you could only dream of.

Court Line later leased their S61’s to British Airways as the need for this kind of work diminished; steam finished in Cape Town docks; the LW Funkhouser was scrapped in 1988; and Court Line was acquired by Canadian Helicopters, the name Court Line to disappear forever.

So to the snaps….

Sorry if any of the colours look ‘off’ but I’ve spent so much time correcting everything I’m not going to rescan. Food calls! You should just be able to make out on the ‘approach’ shot to Funkhouser that it actually had two helipads, one on each half of the ship. The Sikorsky S61 is a big helicopter and we fitted easily within the ‘H’.

And sorry for the reflections on the ‘on board’ shots. It was the best I could do! The Air Cape 748 is attached at the very bottom for interest.

Oh, and as it happens, no problems were experienced photographing throughout that trip. 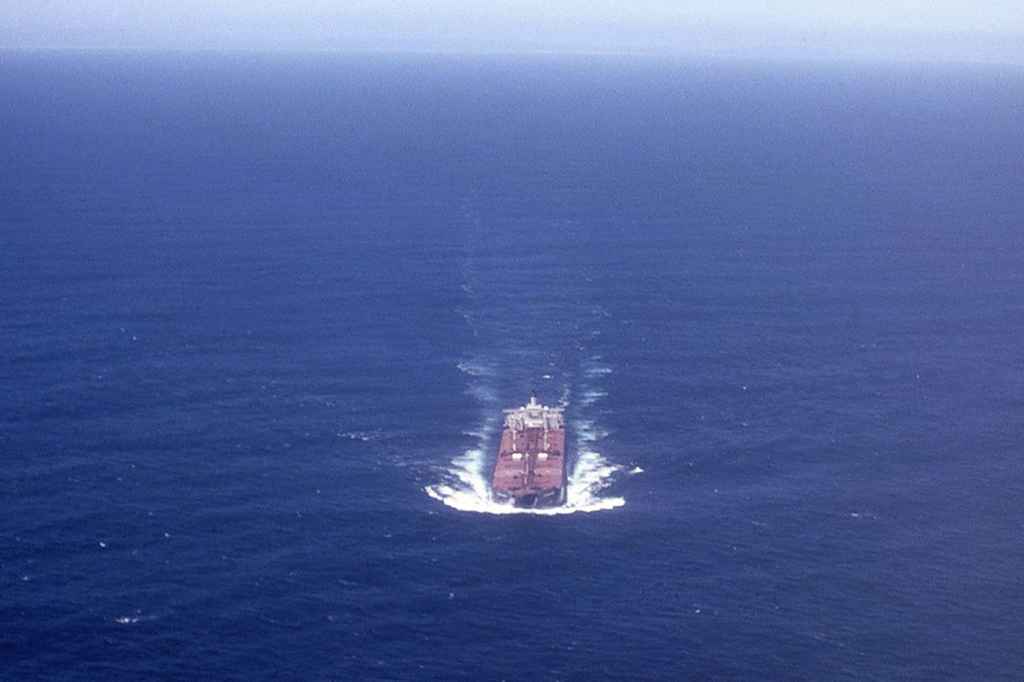 The MV L.W Funkhouser off the coast of Cape Town South Africa about to be visited by Court Line S-61 ZS-HGU on November 15, 1978. Photo by Ron Kosys. 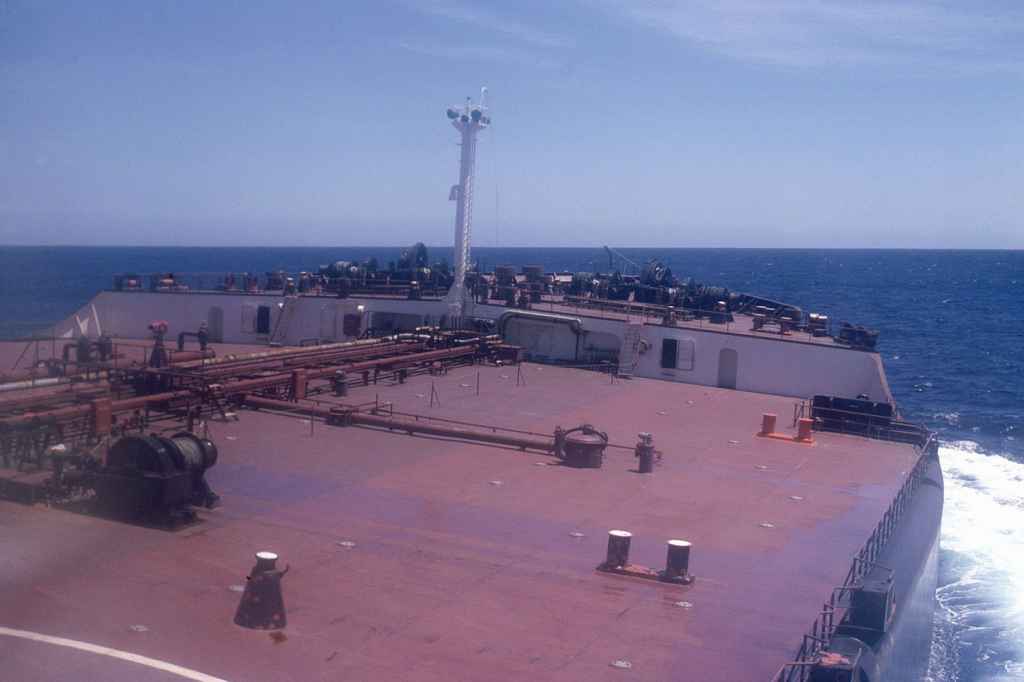 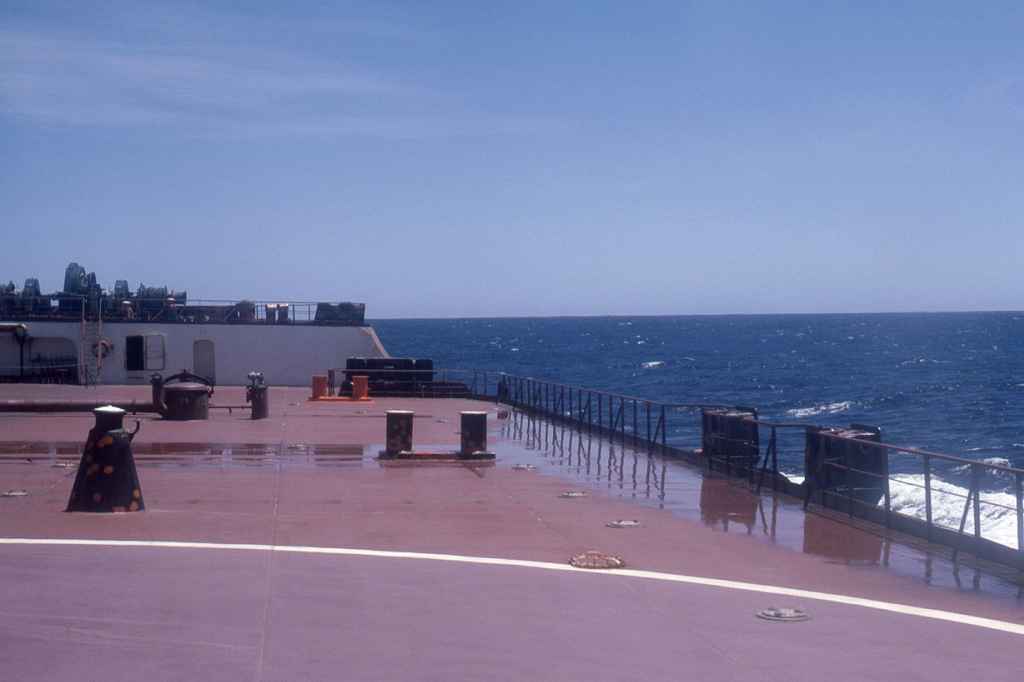 On the deck of the MV L.W Funkhouser off the coast of Cape Town South Africa being visited by Court Line S-61 ZS-HGU on November 15, 1978. Photo by Ron Kosys. 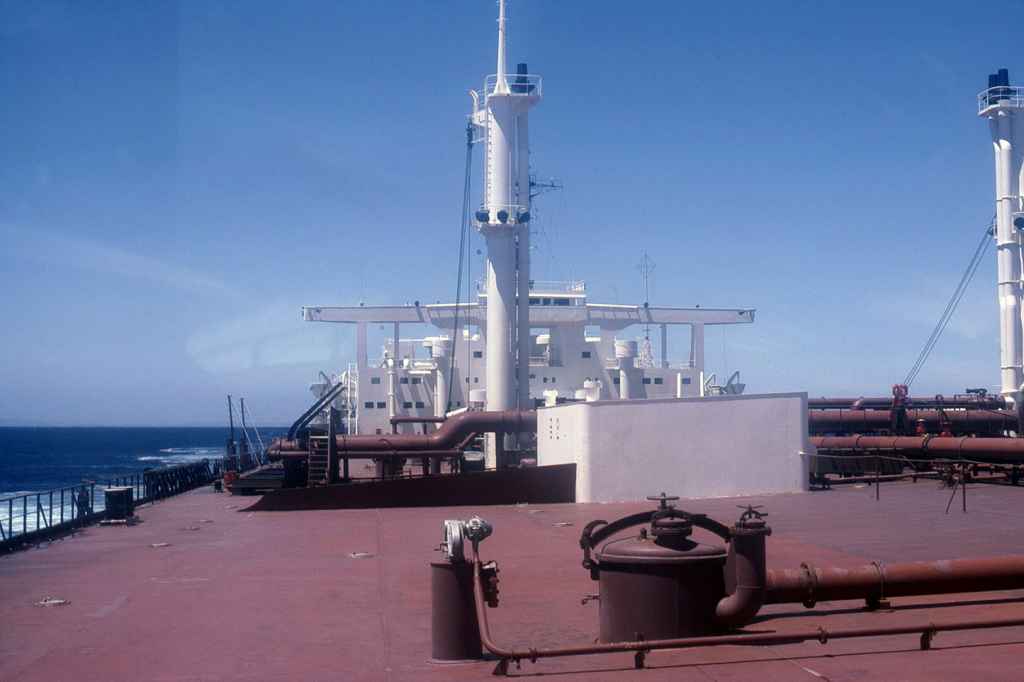 Aft view of the oil-carrying super tanker MV L.W Funkhouser as it nears the Cape of Good Hope. This photo was taken from a Court Line S-61 during a flight on November 15, 1978. Photo by Ron Kosys. 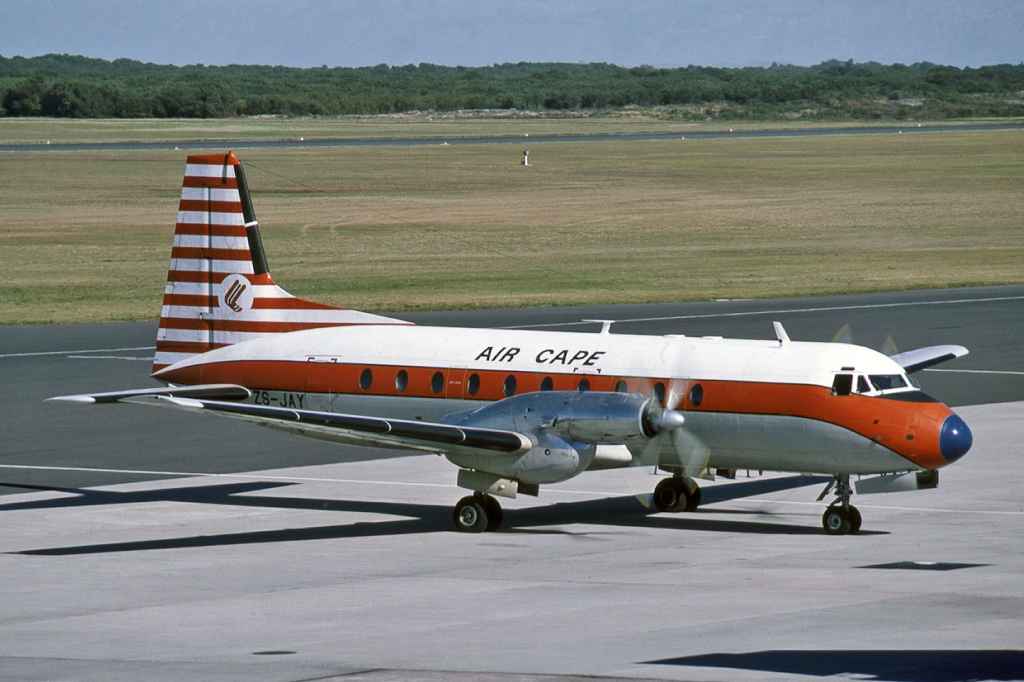 Article Name
Court Lines S-61 1978 maintenance flight to ship off Cape Town, by Ron Kosys
Description
On November 14, 1978, aviation photographer Ron Kosys had the good fortune to be in Cape Town, South Africa, and happened up the once-in-a-lifetime opportunity to fly on a Court Line S-61 as an observer during a routine maintenance flight to a cargo ship.
Author
Ron Kosys
Publisher Name
Henry Tenby
Publisher Logo 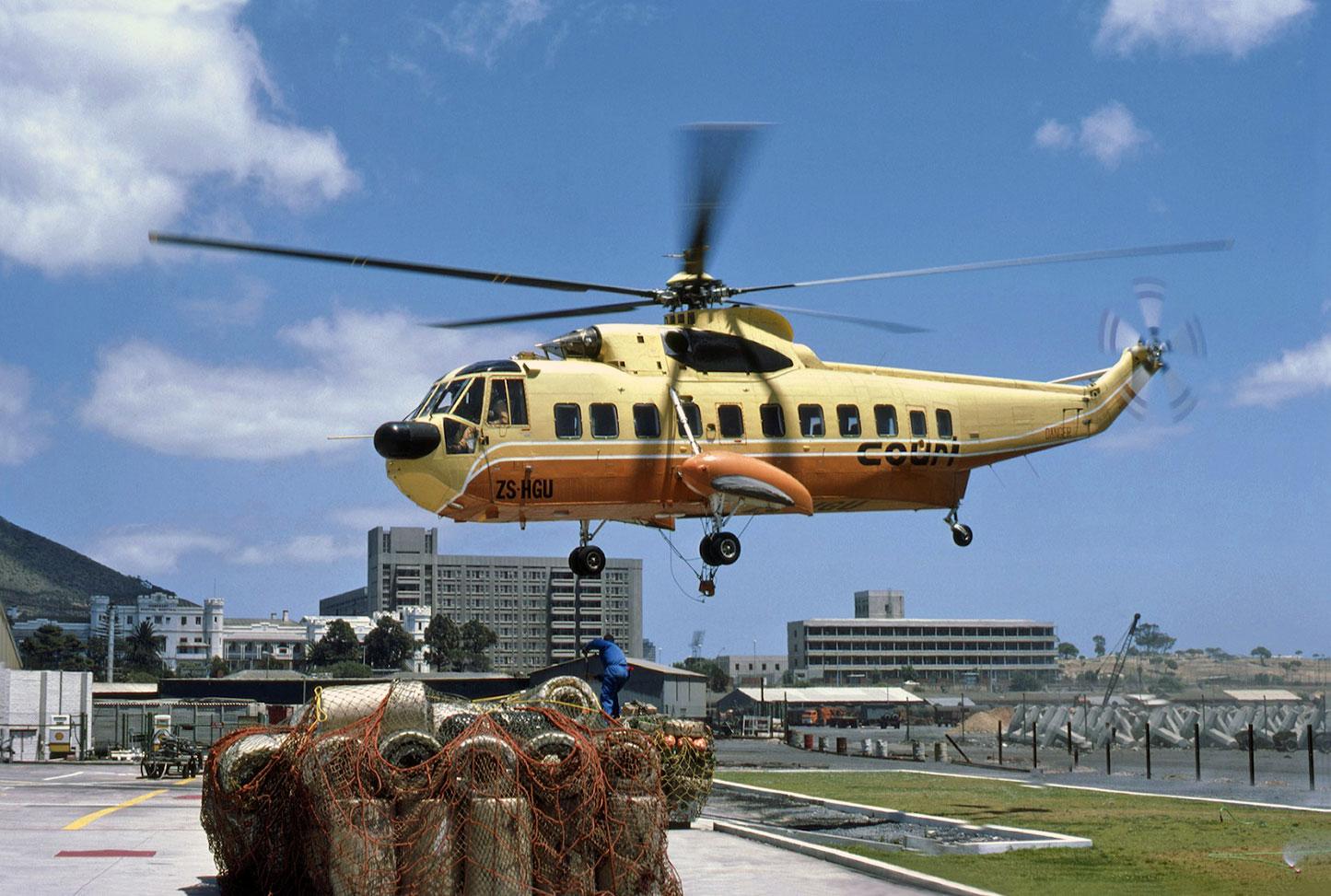