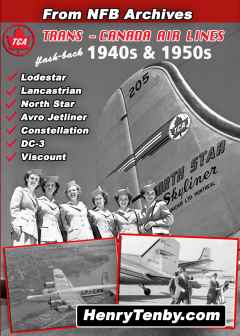 We’re blowing out these classic aviation DVD titles (in large format emory cases) at $7.99 each with $8 flat fee shipping for any quantity ordered (US and Canada only – overseas postage will be additionally invoiced at actual cost).

In the 1940s and 1950s, the National Film Board of Canada documented Canada’s then new national airline to educate the Canadian public about the new mode of travel.

Thousands of feet of Hollywood quality cine film on Trans-Canada Air Lines was dormant in NFB archives for decades, until we discovered this never-before-seen eyeball-popping footage, which is presented in this narrated historic program.

The quality of the footage is the best archival classic airline footage we have ever seen. It was all shot on 16mm employing professional filming techniques and the subject matter has to be seen to be appreciated. It truly is amazingly high quality footage.

The live filming of a TCA Viscount air-to-air with onboard engine shutdown demo complete with original sound is an unbelievable find. You can actually hear the Rolls Royce Dart engines spooling down and then winding up, recorded on board the actual aircraft during this demonstration.  Along with all the other footage, this program is nothing short of a major historic treasure to be enjoyed over and over for years to come.