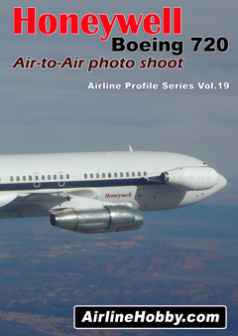 We’re blowing out these classic aviation DVD titles (in large format emory cases) at $7.99 each with $8 flat fee shipping for any quantity ordered (US and Canada only – overseas postage will be additionally invoiced at actual cost.)

Honeywell’s Phoenix-based Boeing 720 N720H has proven to be a reliable engine and avionics test bed for the past twenty years.

In this DVD, you’ll accompany the video crew on Honeywell’s Sabreliner chase plane for a very exciting once-in-a-lifetime ride. We follow the 720 on an actual test-flight over the majestic Grand Canyon between Flagstaff and St. George, Utah.

Our exciting trip starts with the 720’s departure from Phoenix Sky Harbor Airport, which includes great exterior footage of the 720 filmed from a chase helicopter, as well as flight-deck and footage of the engines at full bore filmed from the cabin windows during take-off.

We then formate with the 720 for nearly fifty minutes of wing-tip to wing-tip flying with the classic Boeing posing over some of the most spectacular scenery in the United States. The DVD concludes with the 720 landing back in Phoenix with chase footage of the approach and touch-down, as well as cockpit and wing views from the cabin. The 720 then taxies back to base and crew de-planes. The 720 footage on this DVD is truly amazing!