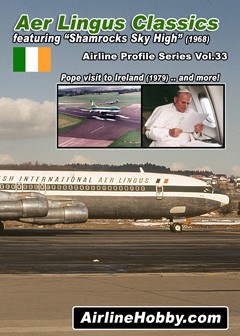 We’re blowing out these classic aviation DVD titles (in large format emory cases) at $7.99 each with $8 flat fee shipping for any quantity ordered (US and Canada only – overseas postage will be additionally invoiced at actual cost.)

In the summer of 1969, flower power was in full swing across Europe, and the hit movie in Ireland that memorable summer was “The Graduate” starring Dustin Hoffman and Anne Bancroft.

This film features plenty of wonderful aircraft footage filmed from Dublin’s packed observation decks, airside, as well as inflight and onboard, and a fair number of lucky Aer Lingus employees appear in the film, which truly counts as an airline history classic to be watched over and over again.