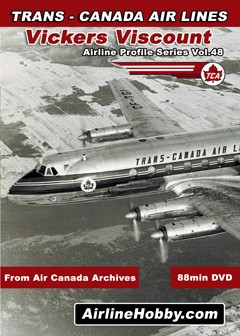 In the early 1950s, Vickers Armstrongs made a significant marketing push to draw Trans- Canada Air Lines as a customer for their revolutionary Viscount turboprop airliner.

When the airline selected the Viscount, a number of promotional films were made by the airline and Vickers to promote the new aircraft to the travelling public.

From the Air Canada historic film archives, this DVD exclusively presents five period films about the Viscount that cover the development and marketing of the aircraft to airlines of the day, as well as films about the aircraft in the TCA operating theatre of the mid- 1950s.

Of special note is the film “Red Carpet” which was produced in house by TCA in the mid 1950s, to explain to the travelling public how the inner workings of the airline come together to make the flying experience a pleasurable and efficient endeavour. Of course the then brand new jetport Vickers Viscount was the most technologically advanced airliner in North America, and the airline uses the new aircraft as the centre-piece for promoting its services to passengers.

The routine flight film takes the viewer for a tour of the Winnipeg maintenance base where the advanced Rolls Royce engine of the Vickers Viscount is explained as being more advanced, reliable and comfortable than piston engines of the day. And the viewer is taken for a specially laid on flight in a brand new Vickers Viscount, where the pilot shuts down not one but two engines in-flight, to demonstrate the reliability and safety that the Viscount brings to travel.

It was our intention to bring these long forgotten films to the forefront so they could be properly enjoyed for their nostalgia value today, as well as in the future. And we are very grateful that Air Canada kindly provided us with the necessary access and support to make it all possible.

Purchasers should be aware that the picture quality of these films is not the same as which we are used to today, and these films are presented for their historic content first and foremost.

SPECIAL NOTE TO CUSTOMERS:
This DVD was produced using compact low environmental impact packaging, which results in considerable manufacturing and shipping savings. As such, we are happy to pass these savings on to you in the form of
FREE worldwide postage for this DVD title.