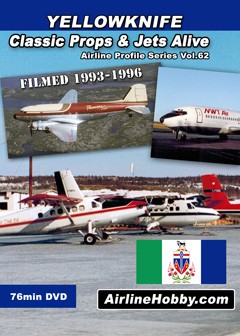 At the time, Henry knew the place was unique in the world of aviation, so he endeavoured to film as much as he could between the years 1993 and 1996, using a Hi-8 video camera that he acquired in 1991. Living in Yellowknife and working at the airport, provided easy and frequent access to all the comings and goings on in all seasons, and this video captures all the flavours of operators that made Yellowknife the famous place that it has become in the ranks of worldwide aviation fans.

All the operators of the day are included in the DVD, namely Air Tindi, Ptarmigan Airways, First Air, NWT Air, Canadian North, Conair, and Buffalo Airways. You’ll see winter, Spring, summer and fall operations, including everything from Beavers to Boeing, wheels to floats to skis, airport to float base to water bombers.

Hard core propliner fans will be pleased to see an extensive filming report on the Conair water bomber base with DC-6, CL-215 and Tracker action. There’s no talking here .. just non-stop engines, taxi and take-off sequences. Buffalo Airways took the GNWT fire fighting contract away from BC-based Conair in the mid 1990s, so this twenty year old footage is a very special memory from an era in the distant past. Air Tindi’s Caribou and the Ptarmigan stretch G-1 make very welcomed cameo appearances along with the occasional Buffalo DC-3 and DC-4 and the the Plummer’s Lodge Douglas DC-3 (captured in taxi, take-off and air-to-air!)

All in all, this DVD has something for everyone, except the “Ice Pilots NWT” drama. We’re serving up 76 minutes of non-stop aviation footage, and invite you to sit back, relax, and strap in to enjoy the ride.