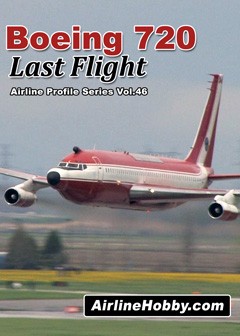 On May 9, 2012, the world’s last operational Boeing 720 took to the skies for the last time ever. Engine test-bed C-FETB was donated by her owners to the National Aviation Museum and was ferried from St-Hubert, Quebec, to her new home at CFB trenton.

Without any official support, our videos crews at both airports captured this historic event on video as presented in this one hour DVD. You’ll see the noisy engine start at St-Hubert followed by take-off and two high speed, low-level airfield flypasts. Our camera team were set up at various locations on the airfield to provide interesting views from different vantage points.

Sadly, the aircraft owners would not assist us in an way with documenting this historic event. Our numerous requests in the period leading up to this event all fell on deaf and uninterested ears. Our keen persistence ruled the day and our team of airfield videographers at both St-Hubert and CFB Trenton filmed every precious second of the 720 as she performed one final time. Suffice it to say, it was extremely unfortunate that we were not permitted to do any live, on-board filming. So sad that this amazing flight took place without any onboard documentation.

When the 720 arrived at CFB Trenton, our cameraman-on-the-scene was at the ready to document the proceedings. Once again requests to officialdom were met with deaf ears. The media folks at CFB Trenton would not allow us the best of access so we weren’t able to see the aircraft coming as it approached the airfield low and fast. Ignorance seems to rule the day when it comes to documenting classic jetliners. However, we did our best to film the two flypasts at CFB Trenton, as well as the roll out, taxi in, and shut down, which was followed by a series of acceptance speeches during the museum handover ceremonies, and a tour of the aircraft.

As of today, there are no more operational Boeing 720s on the planet. This was the last example, and she’s literally flown into the history books and her engines have been silenced forever, but you can relive and enjoy the roar of the Boeing 720 as preserved for posterity on this DVD.