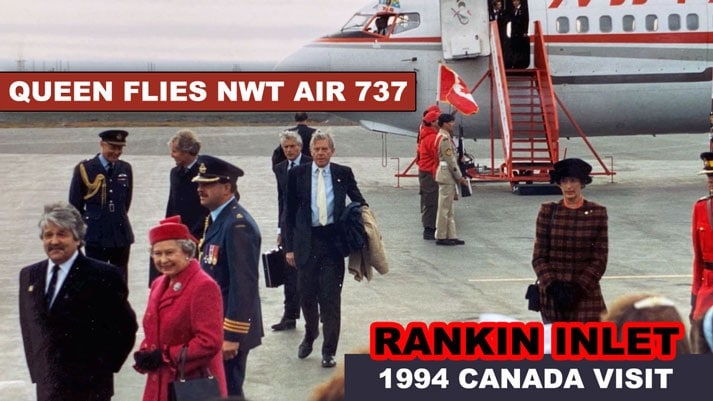 Queen Elizabeth and the Duke of Edinburgh arrive at Rankin Inlet, NWT in Canada’s North as video reported by Henry Tenby on August 22, 1994. 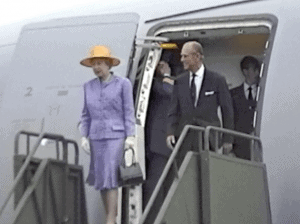 Queen Elizabeth and the Duke of Edinburgh arrive at Yellowknife, NWT in Canada’s North as video reported by Henry Tenby on August 19, 1994.

(SEE BELOW FOR VIDEO PREVIEWS) – In August of 1994, The Queen and her husband the Duke of Edinburgh paid a multi day visit to Canada’s Northwest Territories, after her official opening of the Commonwealth Games in Victoria. Much of the visit was video documented by aviation videographer Henry Tenby (JetFlix TV founder) who lived uo in Yellowknife at the time whilst employed by NWT Air.

On this trip the Queen’s first place of visit up North was her August 19, 1994 arrival at the Territorial Capital of Yellowknife on the shores of the Great Slave Lake. She was flown between Victoria, BC and Yellowknife aboard a Canadian Armed Forces Airbus A310. Henry Tenby was on hand for her airport arrival and he filmed the entire proceedings. She also paid a visit to the Legislature building which was also video taped. 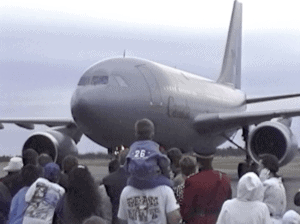 Crowds at Yellowknife airport greet the Queen’s arrival from opening the Commonwealth Games in Victoria on August 19, 1994, as video documented by Henry Tenby.

Then on August 22, 1994, the Queen was flown from Yellowknife to Rankin Inlet on on to Iqaluit on a specially chartered NWT Air Boeing 737-210C. Henry Tenby was on hand in Rankin Inlet to film her arrival at the Rankin Inlet airport where the whole town showed up to welcome her arrival.

Both the Queen’s Yellowknife visit and her Rankin Inlet visit are unique documentations of historic events filmed by Henry Tenby and these shows stream in their entirety at JetFlix TV.

Below we are pleased to present some teaser videos. You can join JetFlix TV here for less than the cost of a Starbucks coffee.