For aviation fans seeking to add new and different types to their log book, the Russian built Yak-40 is a difficult type to secure a flight on in this day and age of composite Boeing and Airbus new generation airliners.

The Yak-40 could well be considered as one of the world’s first regional jets. Seating between 24 and 27 passengers, with a T-tail and three rear mounted engines similarly configured as a Boeing 727 or Trident, with rear airstairs, the aircraft was considerably smaller than other commercial jetliners of the day, and considerably larger than even the largest business jets of the day (such as the Lockheed Jetstar and Gulfstream II).

A straight wing and rugged landing gear made for reduced landing speeds and gravel strip capability, and the self-contained stairs made the aircraft ideally suited and self-sufficient for operations at remote, unpaved strips. Or equally comfortable transporting smaller passenger loads on lesser capacity inter-city regional routes.

In the early 1970s, an international sales campaign saw the Yak-40 demonstrated to a number of carriers across Canada that served remote, Northern and bush communities. The Yak-40 was demonstrated to International Jet Air in Calgary as well as Pacific Western Airlines in Vancouver. No Canadian orders were forthcoming and the type was never certified in Canada, although it did have limited success outside of Mother Russia in Africa, Italy, Germany and a few other niche operations.

It was in Russia and Soviet Block countries (Eastern Europe and Cuba) where the Yak-40 met with its greatest success and found an interested customer base. Many national airlines of these countries operated the type within their scheduled airline operations or as Government aircraft, and the some 1,011 Yak-40s were built at the Saratov Aviation Plant between 1968 and 1981.

In 1978, Aeroflot had 98 Yak-40s in their fleet. Production of the Yak-40 ended in 1981, and Aeroflot’s Yak-40 fleet peaked at approximately 145 examples in 1982, with the type serving over 200 smaller towns, cities and remote outposts across the Soviet Union.

The type’s history explains why the Yak-40 was a fairly illusive type, and difficult type for most aviation enthusiasts to log, unless of course you happened to reside in Russia or Eastern Europe. Today, approximately 40 Yak-40s remain operational, but most are with private companies and Government agencies within Russia. Outside of Russia it is nearly impossible today to book a scheduled airline flight on a Yak-40.

Ukraine-based Motorsich, the airline arm of the engine manufacturer, retains a single active Yak-40 UR-88310 in their passenger aircraft fleet. However, it is only used irregularly on their scheduled routes, mostly as a back-up aircraft. Many aviation fans have made special trips to the Ukraine and booked flights, hoping for the Yak-40 but only to be sadly disappointed when the Yak-40 fails to appear on the flight.

A group of 20 international aviation fanatics (from Canada, the US, Germany, Switzerland, Austria, the UK, Poland, Russia, and France) were treated to the special opportunity of a joy ride on the Motorsich Yak-40 during the Belarus Aviation Tour in early October, 2016, which was organized by Paris-based Merlin Tours.

However, the primary attraction of the Belarus Aviation Tour was the final retirement flights of the Belavia Tu-154M, which marked the last ever scheduled flight of a Tu-154 outside of Russia. Several other enthusiast flights were also built into the tour itinerary (including joy rides on AN-26, AN-140, AN-30, and the Mil-26 monster helicopter).

To accommodate the Yak-40 joy ride, on Saturday, October 8, 2016, Motorsich put the Yak-40 onto their sked flight from Zaporizhia, Ukraine to Minsk, and it flew the route with close to a full load of fare paying passengers. 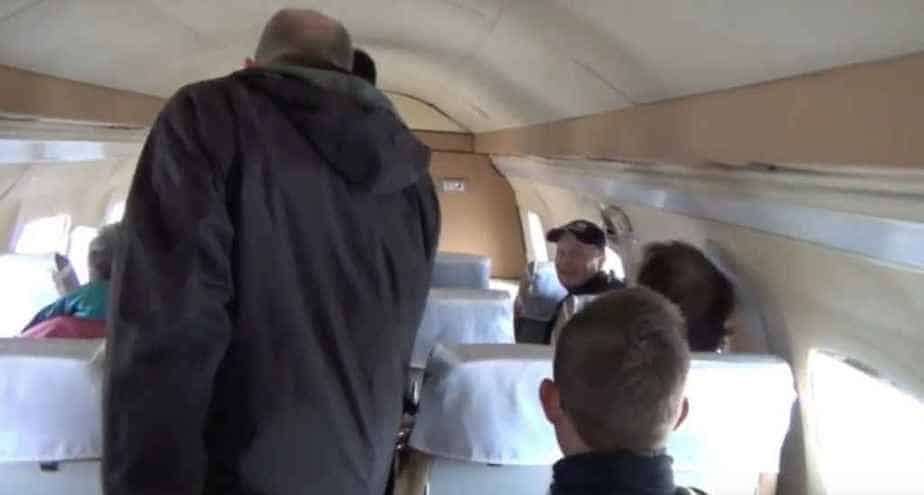 Interior cabin view of Motorsich Yak-40 at Minsk during our pleasure flight.

The aircraft had not actually flown in the month leading up to the joy ride, as it was not required for their schedule nor any charters, and was therefore air tested at Zaporizhia on October 1 to make sure the aircraft was fully fit for the planned flight for the aviation fans.

On the morning of October 8, the Yak’s scheduled flight to Minsk was monitored on Flightradar24, and a sense of relief was felt by all when it was confirmed the aircraft was actually well on its way to Minsk. Motorsich double crewed the pilots to make sure the joy ride and return flight back to the Ukraine that same afternoon was operated by a freshly rested crew.

Shortly after 12 noon our group of 20 aviation fans was led through security and bussed to the Yak-40, which was parked on the itinerant ramp in the company of quite a number of fascinating aircraft, including an assortment of IL-76s, AN-26s, a 747 classic and other goodies.

The group was held inside the closed bus as the specially chartered AN-30 for the tour landed, so landing photos were not possible. The AN-30 taxied to our spot on the apron and parked right beside the Yak-40. Once it shut down, the group was allowed off the bus onto the apron where we were able to photograph both the Yak-40 and the AN-30 in a fairly leisurely fashion, which was nice.

After about ten minutes on the apron we were summoned to board our Yak, and many of us took photos and selfies as we climbed aboard via the integral airstairs. Once everyone was comfortably settled into our seats an announcement was made by the flight attendants requesting that for their own comfort and privacy, they did not wish to be included in our photos and filming. Not an unreasonable request, and for the duration of the flight they were certainly friendly and welcoming.

Configured with 24 seats, the cabin was close to full as the Two pilots who brought the aircraft to Minsk from Zaporizhia sat in row 1 and slept for most of the flight, as they must have started their day earlier than the departure, and were in need of rest. But for everyone else on board, the adrenalin was running at overflow, specially as the three Ivchenko AI-25 engines came to life at 1245. Interesting side note: the engine maker Ivchenko is based at Zaporizhia and this is where the AI-25 engine was developed for the Yak-40 back in the 1960.

The Yak’s engine are most certainly old-school Russian sounding, very much reminiscent of a Tu-134 or Tu-154 starting engines. You get that un-synchronized alarm bell harmonic as the three engines play off each other that was typical of airliner jet engines back in the day. 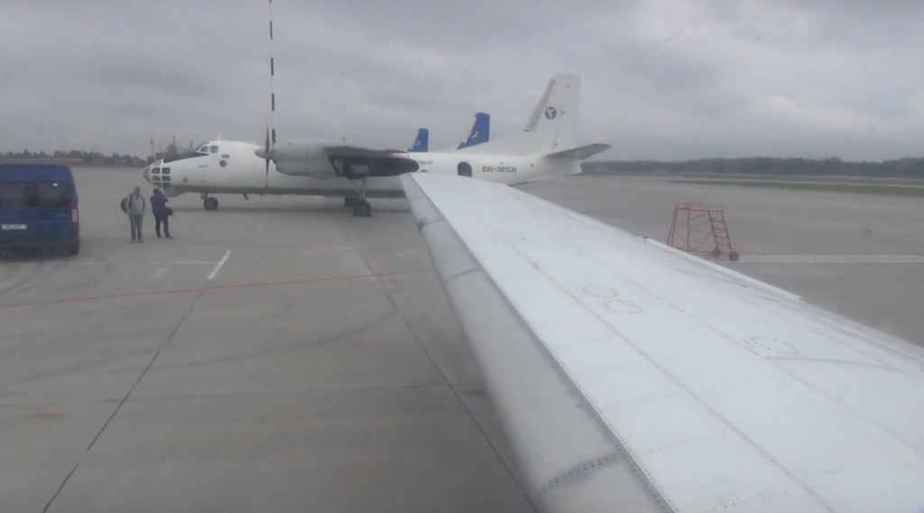 There is not much sense of excitement when an Embraer, Airbus 320 or 737-700 starts its engines, but when a classic Russian jetliner starts engines, most lovers of classic jetliner rides will have smiles on their faces. And this was very much the case for everyone on the Yak-40 as the engines came to life.

Under cloudy but dry conditions, we took off at 1255, and from my seat 4D, just forward of the main wing leading edge, I enjoyed an excellent view of Minsk’s terminal building and ramp areas loaded with nice aircraft, before we entered the cloud base at a few thousand feet.

I am not sure if it was my imagination but within seconds of leaving the runway, it seemed like the aircraft wings were rocking up and down, almost like their aircraft was a bit unstable and required quick manual adjustments by the pilot. As our speed increased this sensation went away after about 15 or 20 seconds. Perhaps this is a characteristic behavior of the Yak-40’s straight wing, when the aircraft transitions to climb speed after leaving the runway. It was certainly a very different experience.

During the 55 minute flight we saw a mixture of blue skies, puffy white clouds below, with the ground visible from cruising altitude on our Yak-40. The generally good visibility made for a very pleasurable and unique flight experience.

For most of the flight, our friendly flight attendants remained in the rear cabin compartment near the door to the airstairs, so we did not see them too much. Although they quickly passed through the cabin to distribute a small sandwich and drink for those who wanted.

Quite frankly, many were too engrossed with the excitement of being on the Yak to partake in drink and food. Almost everyone got up from their seats during the flight to take the obligatory cabin photos and wing view shots from various vantage points in the cabin. Some aviation flight freaks even sequester themselves in the lavatory to photograph and film the curious configurations in such facilities aboard Russian built aircraft.

After what seemed a very generous time aloft, we were turned around and making our way back to Minsk, slowly descending through the clouds that were centralized in the area closer to Minsk. During the decent and approach we got to enjoy more engine harmonics are power adjustments, which tend to be louder as the three Ivchenko AI-25 engines are short and stubby and lack jetpipes or hush-kits to dampen the sound. The louder the better!

After 48 minutes in the air, we landed at Minsk at 1343 under cloudy, but dry conditions. The group collected their belongings and thanked the air hostesses for their hospitality, and slowly deplaned onto the apron for more photos, and there was not a single person who was a micron short of being 100 percent elated with the proceedings.

We all thoroughly enjoyed the Yak-40 flight experience, and for most, it was probably the first time on a Yak-40, and could very well be the last. Motor Sich has two Yak-40s in their fleet and with both now more or less relegated to charter work, chances for scheduled flights are essentially non existent. The punchy little Yak-40 bursts with atmosphere, it delivers a cozy yet comfortable ride, with jet convenience that similarly sized turboprops of today’s design have a tough time matching.

With a 3800 litre fuel capacity it is not a costly aircraft to own and operate. Hence its wide popularity and impressive service record. One has a sense of flying on a much larger aircraft when riding the Yak, and its rugged build and low cost are a testament to its success.

Even today approximately 40 Yak-40s remain operational, and with fuel prices likely to remain low for the foreseeable future, the type should be around for another five to ten years. That said, flight hounds should take advantage of a flight while they still can.