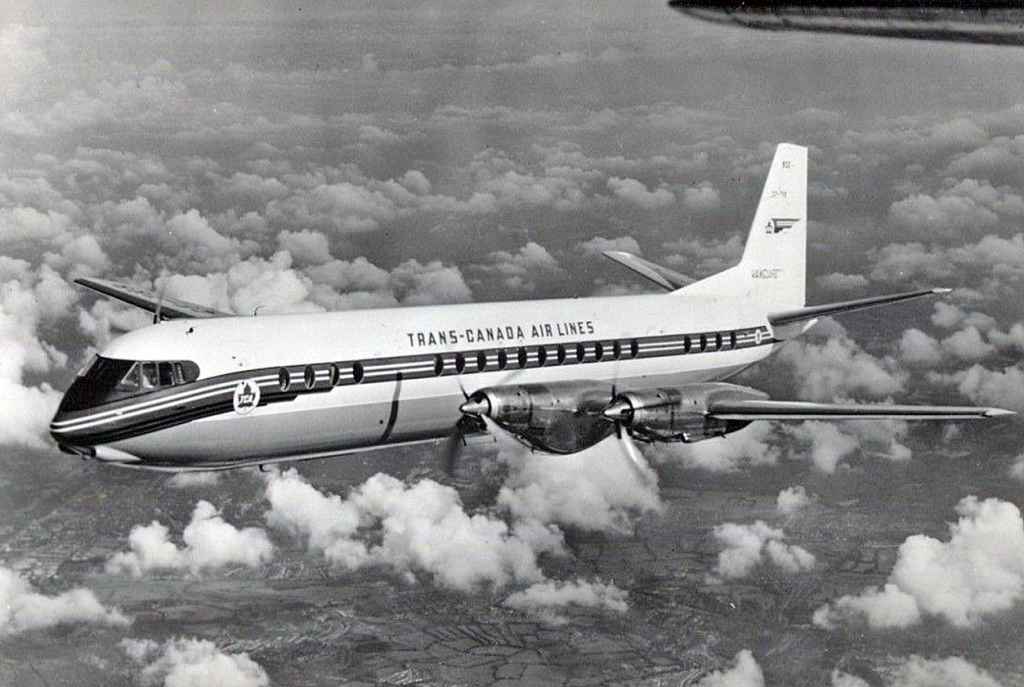 TCA Vanguard inflight circa 1960 over the UK countryside on a test flight from Weybridge, prior to delivery to Trans Canada Air Lines.

The following article appeared in the June 1959 issue of In Flight, by Trans Canada Air Lines

The small boy in the back row of the schoolroom, carefully folding a page from his scribbler into a paper airplane, may be following in his father’s footsteps. At that very moment, in fact, his airline engineer father may be working with a paper plane too. But the parallel ends with the word “paper.” The small boy’s plane is a simple experiment in basic aerodynamics, whereas the father’s is an intricate statistical exercise in airline economics, and a major factor in planning for years ahead.

Flying paper airliners from point-to-point is an everyday activity at Trans-Canada Air Lines’ Montreal headquarters. Seven years ago, TCA began an intensive all-departments study of available and drawing-board airliners in the short, medium and long-range turbo-prop and pure jet classes, to determine their potential for TCA routes. Out of this seven-year study came TCA orders for the world’s ﬁrst and most successful turbo-prop airliner, the Vickers Viscount; the magniﬁcent long-range DC-8 jetliner (to be delivered early 1960), and for the huge Vickers Vanguard turbo-prop for medium-range routes and southern services. 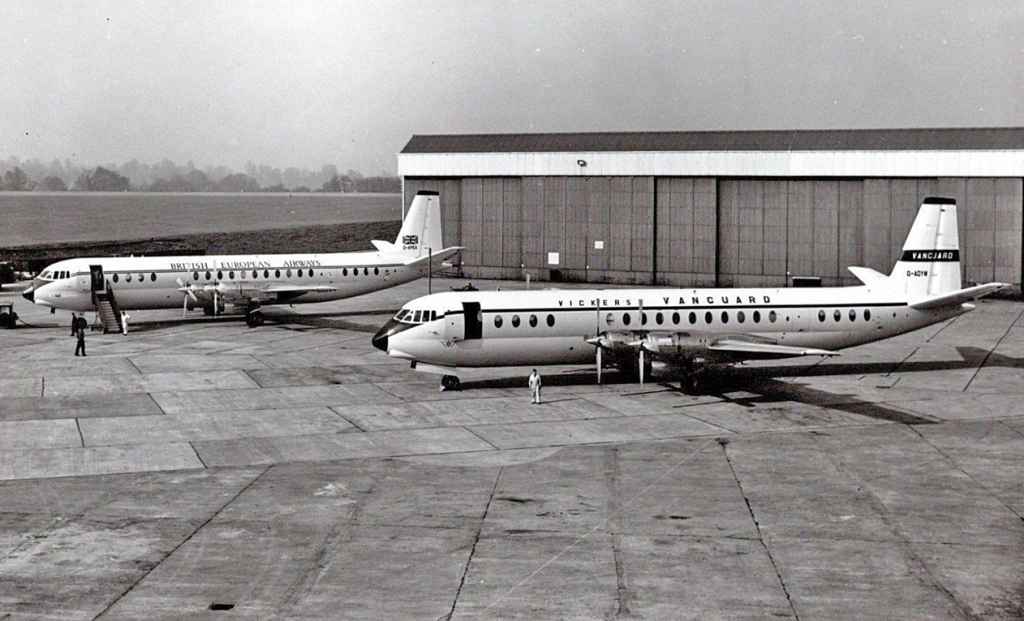 First built Vickers Vanguards G-AOYW and G-APEA at Weybridge circa 1959-1960.

Of these three aircraft, only the Viscount was actually ﬂying (in prototype form) at the time of ordering. For evaluation of both DC-8 and Vanguard, TCA engineers made intensive paper airplane studies, “ﬂying” hypothetical aircraft over TCA Routes, while varying weather conditions, airport holding patterns and mechanical factors to simulate probable operational and economic flight characteristics. Competitive or similar aircraft being offered to airlines were also “ﬂown”; and the Douglas DC-8 and Vickers Vanguard were ultimately selected as most suited to Canadian requirements.

This is the tentative Trans Canada Vickers Vanguard cabin configuration with only 96 seats, versus the maximum 139 seats high density configuration. 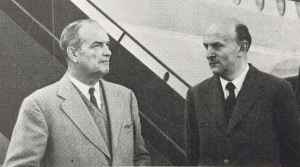 What are the Vanguard’s speciﬁcations? How well will it ﬁt the job analysis? This Vanguard is a big airliner. Grossing more than 140,000 pounds, TCA’s Vanguards will be some 100 mph faster than the Viscount and will carry twice as many passengers (44 compared to 96) in mixed tourist/ﬁrst-class seating. Gordon McGregor, TCA President, after making two landings and a take-off during the Vanguard’s 33rd test ﬂight, said: “Just as I imagined it would be, as good as the Viscount and twice as big.”

Built-in economy and ﬂexibility, wedded to Rolls-Royce turbo-prop reliability and smoothness, put the Vanguard far out in front of its closest competitors. It will operate out of existing runways at most airports, and presents no noise problem. One of its most interesting features is its ‘double-bubble’ fuselage and the exciting potential of this engineering approach.

In most airliners, the tube fuselage concept means that freight holds must be located in the small under-ﬂoor section, which has no real ﬂoor area, or on the ﬂoor level, with passengers. More freight can be accommodated only by removing passenger seats and closing off a freight area. But in the Vanguard, two huge freight holds occupy the lower ‘bubble,’ leaving the main ﬂoor exclusively for passengers. On full passenger service during peak travel hours, the Vanguard can switch to an all-freight schedule when early morning hours cut down passenger loads, thus maintaining high utilization at low operating costs. 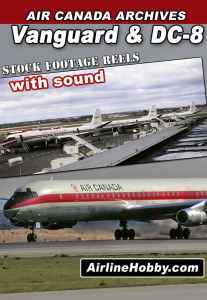 The Vickers design team, led by Sir George Edwards, who was knighted in 1957 for his contribution to British and world aviation, have developed an airframe of almost unlimited application on most world air routes. Working with Rolls-Royce, pioneers in the gas turbine ﬁeld, Vickers chose the new high-compression Tyne, an engine with a weight-to-power ratio 37% higher than the wonderfully successful Dart, yet delivering 3.2 times more power at 40% less speciﬁc fuel consumption. TCA’s own Engineering Department made important contributions to the mutual effort of Vickers and Rolls-Royce to set a new standard in the turbo-prop class.

For the TCA passenger, the big Vanguard will bring such innovations as twin-door boarding on self contained air stairs, which retract into the aircraft. The popular deep oval Viscount-type Windows (40 in the Vanguard, compared to 20 in the Viscount) extend well ahead of the wing. TCA’s tentative 96-seat conﬁguration (see diagram) in an aircraft which will take 139 seats, is extra-spacious.

First of 20 TCA Vanguards will be delivered in late 1960 or early 1961. Shortly after the Vanguards enter service, TCA will become the ﬁrst intercontinental airline in the world to operate an all-turbine ﬂeet. And there is no doubt that without the “paper” airliners that ﬂy their invisible routes in planning and development ofﬁces, the transition from piston to turbine would be much longer in coming, and not quite so well tailored to demanding Canadian requirements. 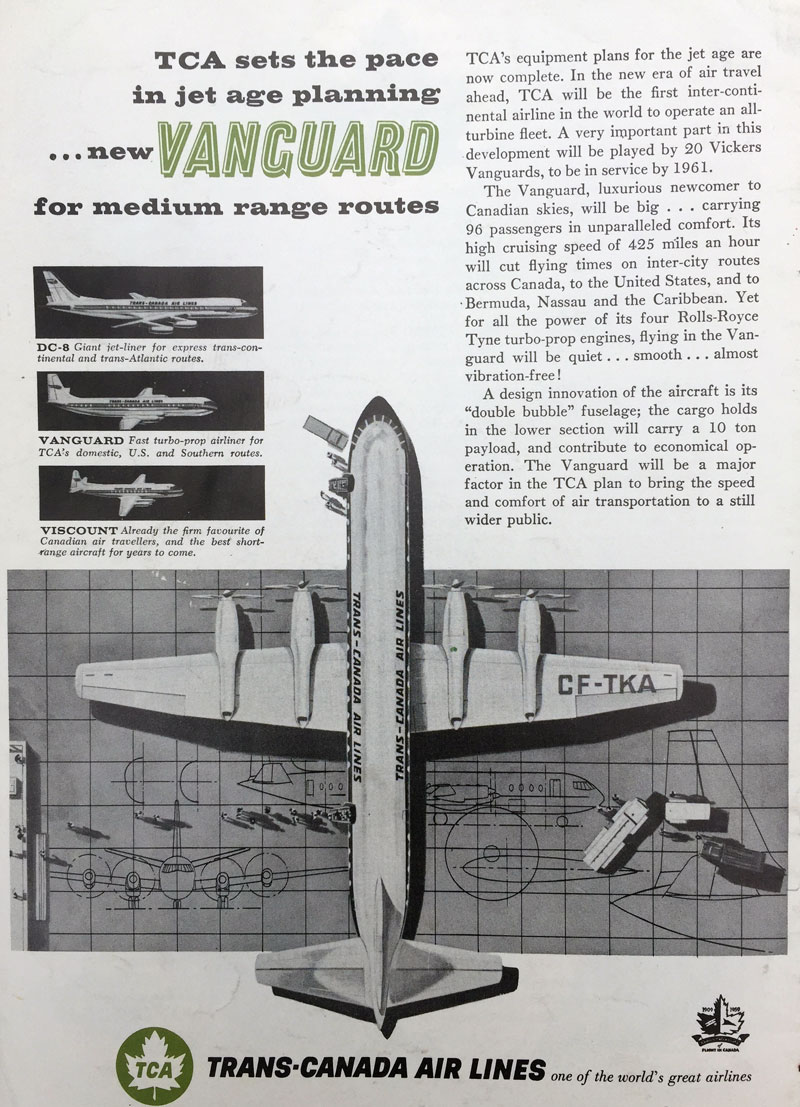 TCA Vanguard advert June 1959, boasting “TCA’s equipment plans for the jet age are now complete. In the new era of air travel ahead, TCA will be the first inter-continental airline in the world to operate an all-turbine fleet.” TCA had a standing order for 20 Vickers Vanguards to be inservice by 1961.