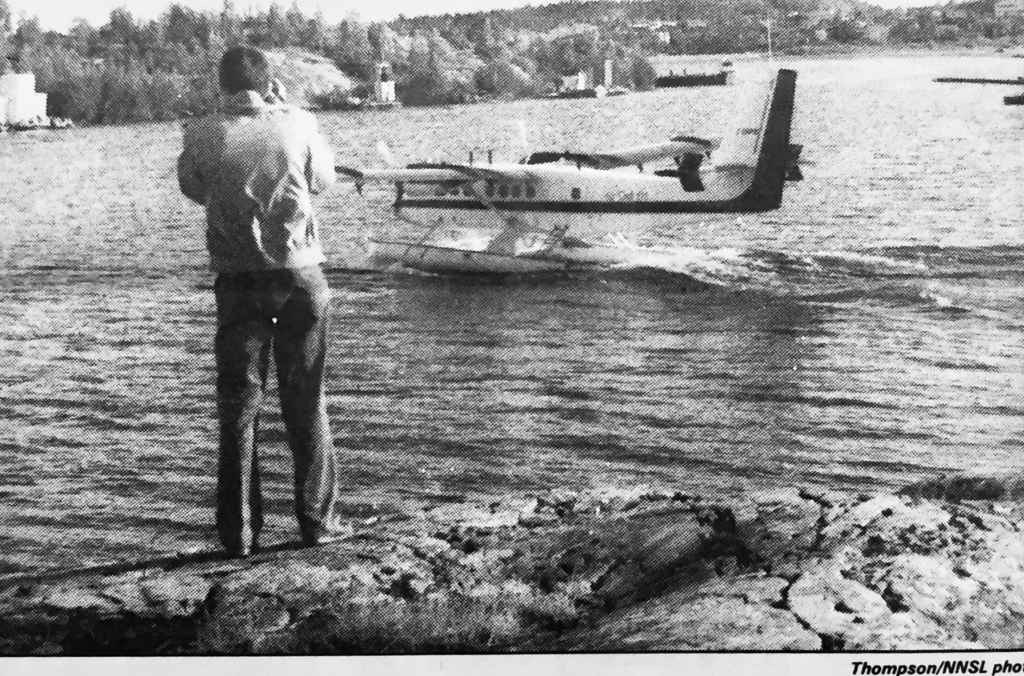 Henry Tenby has become a regular sight on the rocks behind the Air Tindi float base, where he spends much of his spare time getting pictures of exotic float planes.

Talking to Henry Tenby is like discovering a new and exotic culture. Tenby is an aviation enthusiast, and airplanes occupy most of his waking life.

He works for an airline, builds model airplanes in his spare time, spends his evenings down by the Air Tindi ﬂoat base in Yellowknife’s Old Town, waiting to ambush out-of-town float planes with his camera. He exchanges letters with airplane buffs around the world, and even helps organize conventions for enthusiasts. 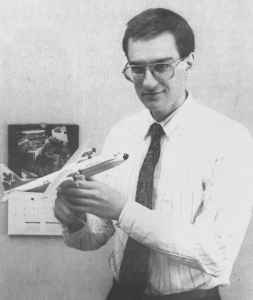 Apart from taking and trading photos of airplanes, Henry Tenby has also amassed a large collection of airplane models, and is seen here admiring an NWT Air Hercules in his Yellowknife office.

In the aviation culture, every artifact is collectible: old schedules, swizzle sticks from drinks, playing cards, even vomit bags.

Most importantly, airplane buffs collect pictures of airplanes. Ramp shots, they call them: planes on airport tarmacs, with no people or baggage trains in view.

“It‘s like a little confraternity,” says Larry Milberry, a publisher of aviation books who was in the N.W.T. last week to visit Tenby and bone up on his Northern aviation history.

“When they get together, they have what I view as infernal slide shows,” Milberry says. The buffs will watch tray after tray of airplane slides, for hours at a time, he says.

“This is like a world—wide hobby,” Milberry says “it’s huge for example in Japan . . . The airplane spotters in Britain are absolute maniacs.”

Tenby is a bit of a non-conformist within the aviation culture, because he likes to take pictures of airplanes in ﬂight, and hopes one day to put together a book of air-to-air photos.

But then again, he first got interested in aviation back in 1967.

“My grandmother took me out to the observation deck at Vancouver airport,” he says. “It was love at first sight.”

Back home in Vancouver, he has 50 airline display models of fibreglass. “I don’t own a home big enough to store them all,” he says.

When Tenby graduated from school, he went to North Dakota to do a bachelors in aviation. He then went on to do a masters in business administration.

Tenby got a job in Seattle with an aircraft-leasing company. But when the company tried to transfer him to a job in Peru, the scene of a nasty civil war, Tenby balked.

He called up an acquaintance at NWT Air and got work with the airline, choosing planes and helping with budgeting and scheduling.

“Yellowknife is fascinating from an aviation standpoint,” Tenby says.

The fact that many Northern communities are only accessible by air and the large number of float planes in the North make Yellowknife an ideal spot for the hard-core aviation buff, he says.