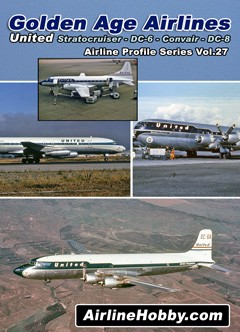 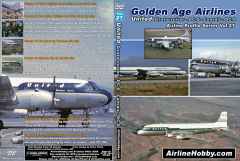 These wonderful films capture United Airlines in the magical era of the 1950s. Back then, travel by air was a completely new method of travel, and the airlines set out to educate the general public as to how safe, convenient and efficient air travel was becoming.

This DVD is loaded with fabulous classic propliner footage from the 1950s, and it documents how air travel was so special fifty years ago. United Airlines Boeing B-337 Stratocruisers, Douglas DC-6s, Convair CV-340s and the first generation of smokey Douglas DC-8s are all featured in the classic airline films presented herein.

The footage on this DVD was shot on film and is not to the same image quality levels as today’s broadcast quality video cameras. Also, as is typical of film footage from this era, the footage has suffered deterioration over the years. These promotional movies are presented for their historical interest value as well as to preserve them in DVD digital format for the enjoyment and education of future generations.

Chapter 2) United Airlines DC-6 The 6534 Story (29 min)
This all colour film tells of the detailed story of United DC-6 ship 6534 as the crew and passengers go from Los Angeles to Chicago Miday Airport, and then to New York City. This early to mid-1950s film is loaded with amazing aircraft footage the likes of which was rarely documented in the 1950s. The film explains how United maintained their DC-6s to very high standards, how the crews operate the aircraft from getting their weather, to navigation and flying the aircraft. Cabin service and passenger comfort levels are presented, and the aircraft footage has to be seen to be believed. There is quite a lot of actual air-to-air footage of the United DC-6, with great airport and runway landing and take-off sequences.

Chapter 3) The Sky is For Everyone (30 min)
Produced for United Airlines by General Dynamic Convair Division in the early 1950s, the colour film offers a very detailed look at the airline’s short-haul domestic Convair 340 flight operations. First the film introduces the Convairliner explain what an amazingly safe and capable aircraft she is, even showing footage of one of the engines being shut down in flight with the aircraft safely climbing on only one engine. The film then breaks United’s short haul route network into segments and shows the Convairliner doing its job in each market. Just like the DC-6 film above, this film is loaded with superb aircraft and airport footage, all shot in glorious colour, and preserved herein for the viewing enjoyment of future generations.

Chapter 4) Airplane Trip by Jet (10 min)
In this educational black and white film from 1961, we follow two children (Sue and Bob Allan) as they take their very first jet flight, which happens to be on a United Airlines Douglas DC-8-10 from New York to Los Angeles. The film highlights the ease and benefits of jet travel, with lots of neat DC-8 footage. The film starts with the children boarding the flight in New York and their dog skippy being placed in the freight hold. The kids and other passengers are buckled into their seats, the pilots then taxi away from the jetway and the DC-8 takes-off with lots of black smoke pouring out the engines. The film the explains all the luxuries of onboard jet service, and the aircraft the approaches and lands on the west coast. There is plenty of DC-8 footage.

Chapter 6) Early 1970s Snowbirds Promo (4 min)
This promo film explains how the airline is serving the early 1970s swinging winter ski market, with Boeing 727-100s. Some nice vintage onboard footage showing aircraft interiors of yesteryear. The early 1970s aircraft interior styles were very different from what we are used to today!