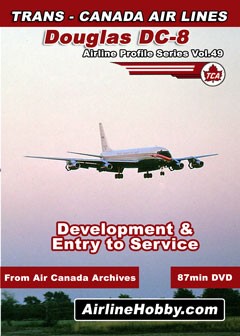 In the late 1950s, Douglas Aircraft of Long Beach, made a significant marketing push to draw Trans-Canada Air Lines as a customer for their new, revolutionary jet transport, the Douglas DC-8.

When TCA selected the DC-8, a number of promotional films were made by the airline and the manufacturer to promote the new aircraft to the travelling public.

From the Air Canada historic film archives, this DVD exclusively presents four period films about the Douglas DC-8 that cover the development and marketing of the aircraft to airlines of the day, as well as films about the aircraft in the TCA operating theatre of the very early 1960s. Between films we have included a number of fabulous 1960s era TV ads produced by Air Canada which feature the DC-8.

The film “4 Hours and 40 Minutes” is particularly significant as it was filmed live on the occasion of the first ever pure jet passenger service in Canada, a TCA DC-8 flight between Toronto and Vancouver on Friday, April 1, 1960. The film revolves around a young boy and his mother who travel on the flight and marvel at the new form of jet passenger flight. The film features live flight deck footage, cabin footage, and plenty or airport terminal and exterior footage, and is truly a gem of a film that we are pleased to have uncovered in the archives.

The Jet Pilot films tracks a TCA DC-8 crew on their duty operating a routine service from snowy Montreal down to sunny Jamaica, also circa very early 1960s. This film was also filmed live on board, with live cockpit footage, engine starts, and is a really fabulous documentation of the inner workings of jetliner travel when the mode truly was in its infancy, and the travelling public the world over only knew travel by propeller driven aircraft.

It was our intention to bring these long forgotten films to the forefront so they could be properly enjoyed for their nostalgia value today, as well as in the future. And we are very grateful that Air Canada kindly provided us with the necessary access and support to make it all possible.

Purchasers should be aware that the picture quality of these films is not the same as which we are used to today, and these films are presented for their historic content first and foremost.

SPECIAL NOTE TO CUSTOMERS:
This DVD was produced using compact low environmental impact packaging, which results in considerable manufacturing and shipping savings. As such, we are happy to pass these savings on to you in the form of
FREE worldwide postage for this DVD title.