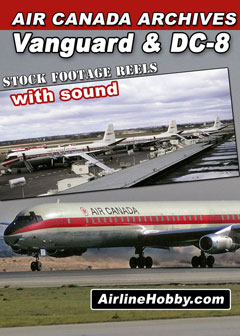 DVD SOLD OUT HOWEVER JetFlix.TV members can stream this show with unlimited access.
CLICK HERE to join JetFlix.TV for only $6.99/mo (cancel anytime).

FROM AIR CANADA ARCHIVES:
In the 1960s, Air Canada’s medium to long haul services were operated by their fleet of British-built Vickers Vanguard and Douglas DC-8 jets. The Vanguards and DC-8s of Trans-Canada Air Lines and Air Canada were once common place at Canadian airports and this DVD is a tribute to these great aircraft.

When Trans-Canada Air Lines first took delivery of their Vanguards in the early 1960s, the company PR department filmed the inaugural Vanguard flights to Jamaica, Barbados and Bermuda in colour. This amazing footage includes plenty of onboard footage of the cabin services as well as passenger boardings and arrivals at the various airports.

A summer of Expo ’67 Air Canada Vanguard departure from Quebec City was also filmed in colour as was an early TCA Vanguard flight to and from Edmonton during a cold winter’s day in early 1960s. These sound films are the most comprehensive period Vanguard films that have ever been presented on DVD, and they represent the entire film documentation of the Vanguard existing in the current Air Canada archives.

Please be aware that these films are presented for their historical importance, and not for their production values and/or image quality. These films are distribution copy prints that were made 70 years ago, and the image and production quality is not the same as we are used to today. In some of the films we experienced film breaks, film warpage (which result in the film being unable to hold focus), broken film sprockets, and blown out sound levels. So these films are by no means perfect. But we believe their historic value over-rides their technical imperfections, and we present them as a look back on a past era.

Be the first to review “Air Canada Vanguard and DC-8 DVD” Click here to cancel reply.