Aggregation app brings that old seat-back staple “The Airline Inflight Magazine” into the 21st century. The airline inflight magazine was first conceived back in the 1950s and has remained unchanged for the past 60 years. The concept has now been revitalized for the 21st century.

Touted by its creators as a “one-stop mobile travel resource”, the Altitude Inflight Magazines App (available for iOS and Android) provides one-click download access to dozens of inflight magazines for on-the-go reading. Each participating airline’s latest inflight magazine as well as a selection of back issues for the past year are available on the app. Readers can sort magazines by airline name, magazine name, and geographic region, and receive notifications when new issues of their favorite titles are available on the platform.

According to the app’s co-creator Henry Tenby, “the Altitude Inflight Magazines App extends each airline’s most recent travel and destination articles and airline news to an engaged and affluent global readership audience that exists beyond the traditional seat-back pocket. We’re opening it up to a truly global audience.” 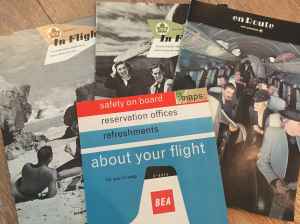 Old Trans-Canada Air Lines and BEA inflight magazines from the 1950s and 1960s.

The traditional airline inflight magazine has roots going all the way back into the 1950s, to the early days of the airline industry. Even back then airlines realized that passengers could be marketed to with interesting travel destination news, via a magazine or multi page all-colour printed brochure. These early inflight publications touted the airlines exciting overseas and holiday destinations which were previously accessible by lesser cost ship or rail.

Tenby explained “the inflight magazine sector was essentially ripe for disruption, and by extending the shelf life of this amazing travel content to thousands of new readers for months beyond the historical 30 day lifespan, the Altitude Inflight Magazines App enhances value for airlines and travellers alike.”

Co-creator Niels Dam, from Leeuwarden, Netherlands added “The app promotes an airline’s brand and destinations to potentially millions of global readers who may not yet be passengers, but could very well be in the future. The magic of aggregation and web app global reach.”

Altitude app is a Euro-Canadian venture with offices in Vancouver, Canada and Leeuwarden, Netherlands. Although the app is designed specially for tablets at the time of launch, phone and desktop versions will be released very soon.