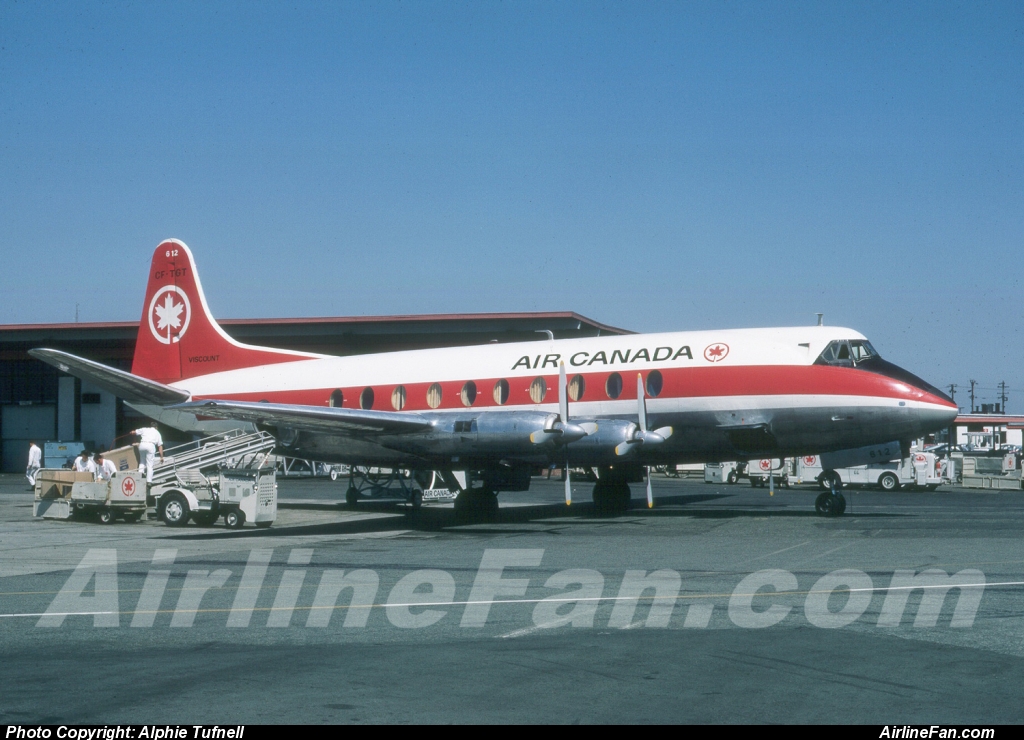 Air Canada Vickers Viscount CF-TGT is serviced between flights at Vancouver’s old South Terminal Building in June of 1967. This particular Viscount was delivered to TCA on August 4, 1955, and was WFU in 1969. She was broken up at Winnipeg in 1970.

The landing of two Air Canada Viscounts at Toronto and Montreal April, 27 marked the retirement of the short-haul aircraft that have been a familiar sight in Canadian skies for 19 years.

The last 24 Viscounts have been sold to two Montreal firms, United Aviation Services Ltd. and Beaver Enterprises Ltd. In all, Air Canada and its predecessor Trans-Canada Air Lines purchased 51 of the British built machines.

The Viscount was the first turbine-powered airplane to be used on this continent, and it was in April, 1955, that Trans-Canada Air Lines first put it on scheduled daily service between Montreal and Winnipeg, with stopovers at Toronto and Fort William, Ont., now Thunder Bay.

The first flight was piloted by Capt. Walter Kent, now retired and living in Toronto, and its first officer was Capt. D. F. Tribe, who lives in Vancouver and now flies Air Canada Boeing 747s. 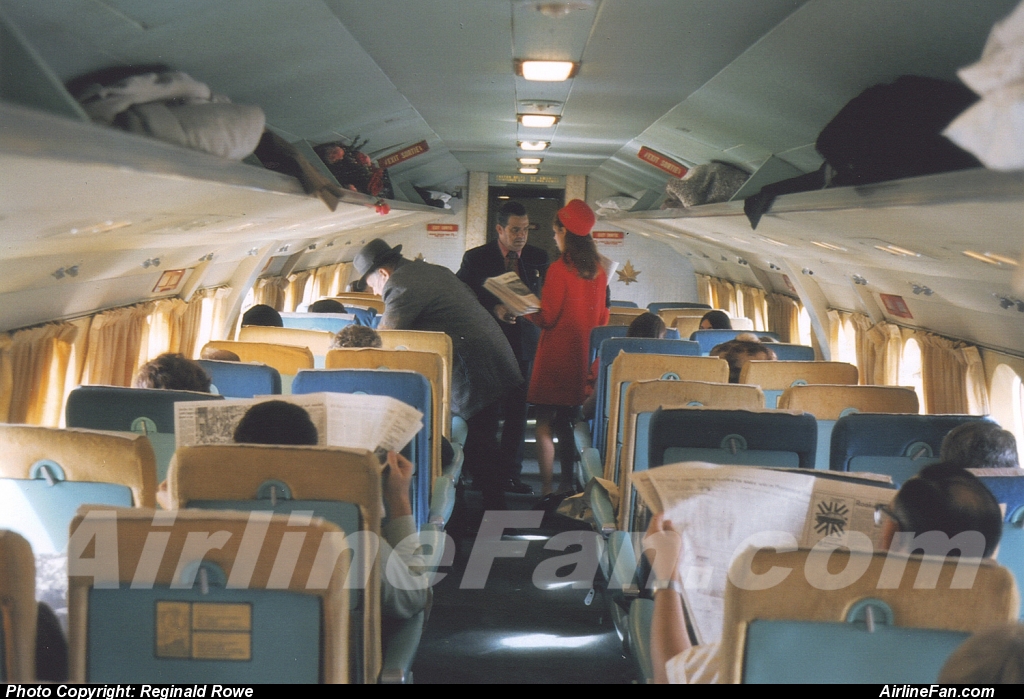 Air Canada Vickers Viscount on board pre departure from Ottawa circa 1966. This photo was supplied by “Breathnach” and seeing the interior of an Air Canada Viscount from the mid 1960s is pure magic, as it is such a rare image. The passengers are nicely relaxed reading their papers, while the flight attendant up front greets a boarding passenger with a newspaper. A Viscount memory from half a century ago frozen in time.

The first Viscount was delivered to Montreal from Wisley, England, with enroute technical stops made in Scotland, lceland, Greenland and Labrador back in December, 1954.

Manufactured by Vickers Armstrong, the Viscounts were delivered to their Canadian owners over a period of five years. TCA bought 51 of the little workhorses, and the large sale to a North American customer helped give British aviation technology a much-needed shot in the arm. Nearly 500 Viscounts were sold over the years, giving the aircraft the distinction of being one of the most successful commercial aircraft produced by Great Britain. 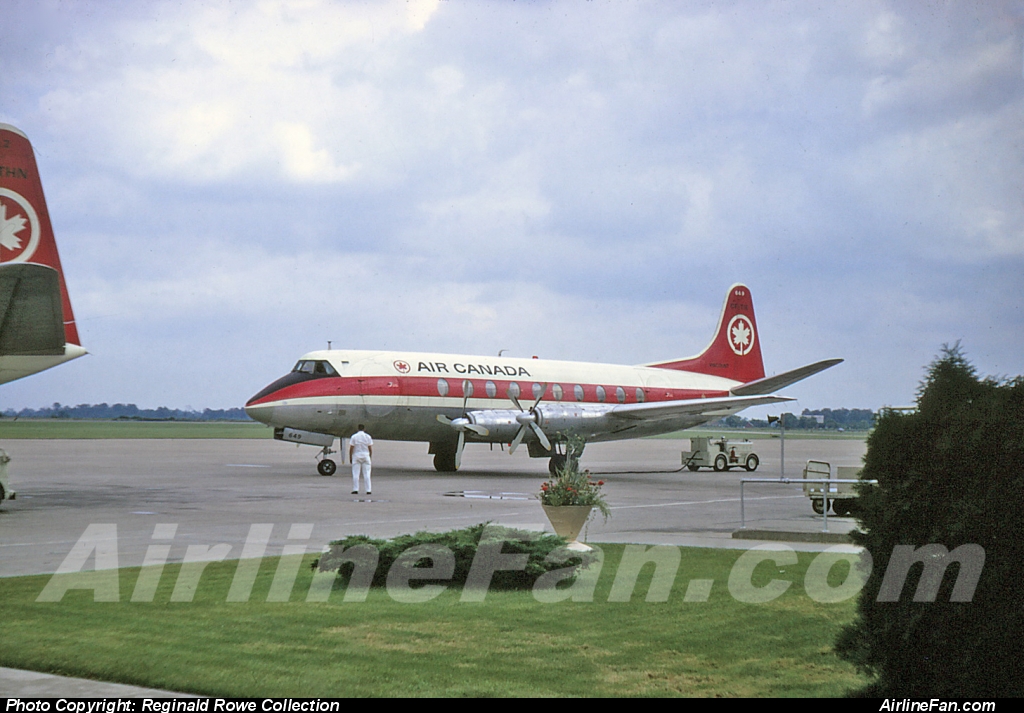 Air Canada Vickers Viscount CF-TIE at London, Ontario in September of 1966 with the company of a sistership. London was a sked Air Canada destination from Toronto Malton for Air Canada Viscounts and even Vanguards in the 1960s and early 1970s.

And for TCA’s passengers, it gave them the opportunity to ride aboard not just another “prop-job” but on an aircraft that would play the key role in aviation history by bridging the gap between the era of piston engines and the dawn of the jet age.

The 81-foot long, four-engine Vis-count was the darling of cabin and cockpit crews alike. “It was a beautiful airplane, and we all loved it,” recalls Mrs. L. l. (Billie) Houseman, Air Canada’s chief stewardess for many years.

The aircraft had a galley and coat room in the rear, with two lavatories in the from. As its main visual feature, it had huge oval-shaped windows whose drapes, made of hand-woven plaid, were designed by Karen Bulow of Montreal. 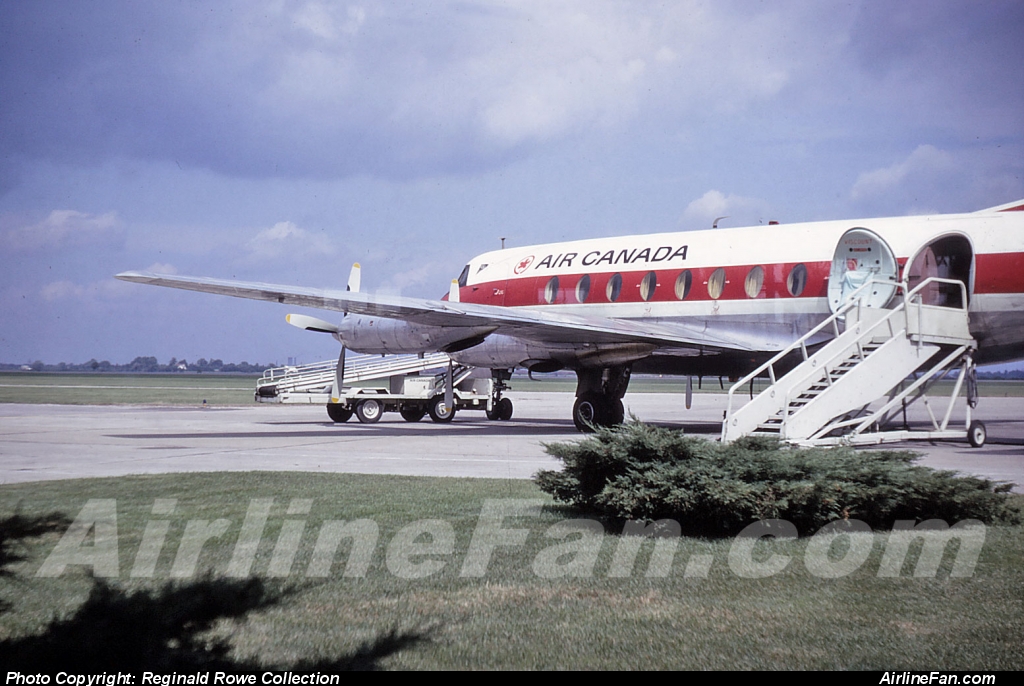 Air Canada Vickers Viscount awaits passengers at London, Ontario in September of 1966. London was a regular schedule destination for Air Canada Viscounts and even Vanguards in the 1960s and early 1970s.

“Work was made very easy for the two stewardesses on board. And another thing: the plane was beautifully quiet,” Mrs. Houseman recalled.

The fact that the Viscount was considered a “silent” aircraft was rendered more evident by its comparison with the Canadair DC-4M2 North Star, powered by four roaring Merlin piston engines. The same engine that powers the famous Spitfire and Mustang fighters of World War two fame. Next to them, turbo-props sounded almost like whispers.

Pierre Charbonneau, now a captain on Lockheed L-1011 aircraft, remembers with fondness the 12 years he spent flying Viscounts across the land. And he, too, extols the plane’s quiet virtues.

“There was no noise, no vibrations,” Capt. Charbonneau said. “You put a five cent piece on a table or on an arm rest, and it would not even quiver. For those days, that was quite remarkable.” 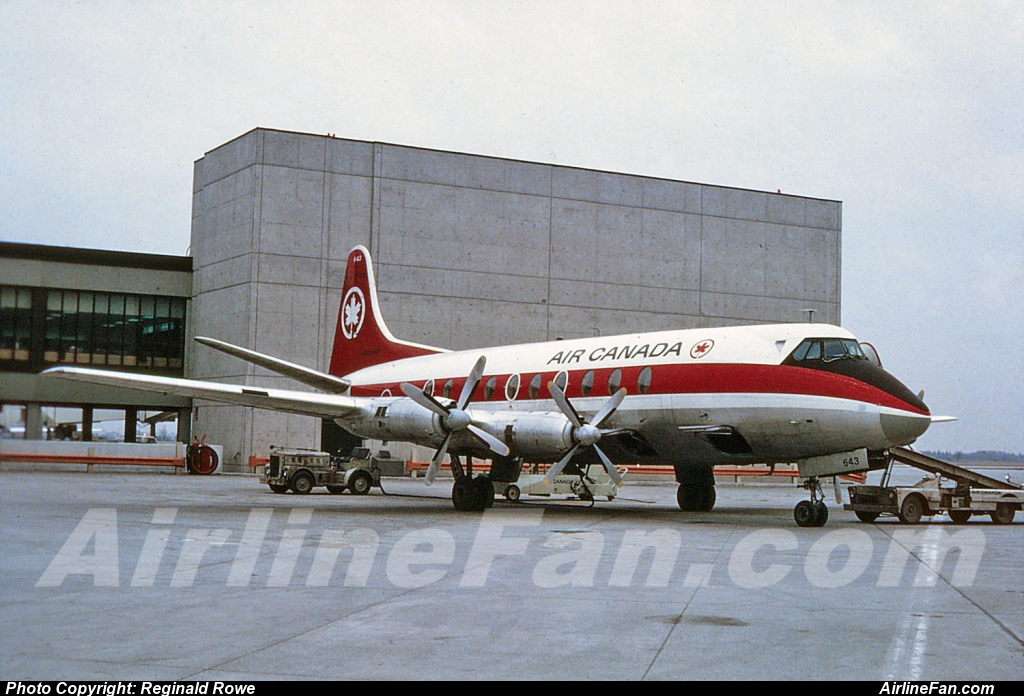 The captain added that “the Viscount was an extremely versatile airplane for its time. It showed high reliability and efficiency. The Viscount’s four Rolls-Royce Dart engines were so proficient that they hardly offered maintenance problems.”

The Dart engine, over its many years of operations, became indeed refined to the point that it offered an industry standard of excellence and dependability. The development was exemplified by the growth of the overhaul life of the engine. In 1958, it was overhauled every 2,000 hours. In 1968, the time between its overhauls was 9.000 hours. The Dart’s reliability allowed the 51 Viscounts of Air Canada to ﬂy a total of 1,422,595 hours over the years of service. That figure represents approximately 392,636,220 statute miles.

The Viscount had several seating configurations in the 1950s during the early years of service with TCA. Some were all first class, seating 44 persons. But in recent years, the Viscount was configured to seat 48 passengers in an all Economy configuration.

That was only a handful more than the 40-passenger North Star offered. But the difference between the two aircraft was more evident in other fields. The Viscount was much smaller in size, but was a faster aircraft with a cruising speed of 315 mph. 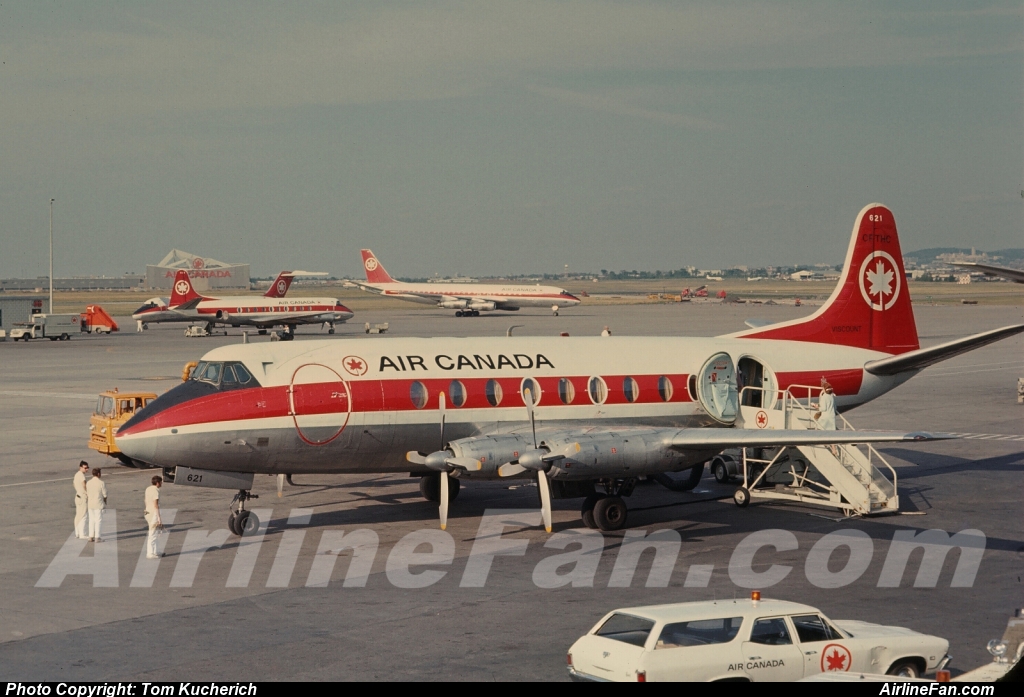 Air Canada Vickers Viscount CF-THC seen from the observation deck at a very Montreal Dorval in July of 1971, the photo being taken by Tom Kucherich.

Good and useful as it was, however, the Vickers Viscount could not avoid becoming an obsolescent aircraft. And just as it had replaced the Canadair North Star and the DC-3s of another era, it had to give way in turn to more modern and sophisticated equipment: the McDonnell-Douglas DC-9. The airline has 53 of the pure jet DC-9s which have now taken the Viscounts’ place as Air Canada’s largest fleet of a single type of aircraft. Air Canada’s fleet of Viscounts was gradually reduced in size throughout the years, until there remained only the 24 airplanes recently acquired by the two Montreal second hand aircraft brokerage firms.

Some of the previous Viscounts were retired and sold, others were “cannibalized” their parts being used for the upkeep of the existing fleet, while other parts were donated to aircraft maintenance training schools across Canada. Air Canada Vickers Viscount CF-THL seen from the observation deck at Montreal Dorval in September of 1973, just a year before the Air Canada Viscount fleet was retired.

Among the purchasers were the Canadian Ministry of Transport. William C. Wold of New York, Canadian Schenley, Transair of Winnipeg, and United Aircraft of Montreal, which is using a former Air Canada Viscount as a test bed for development of a PT6A-50 engine. In future years, the Vickers Viscount is sure to be remembered with great fondness by Canadian air travellers for being a reliable, comfortable and safe aircraft that was an airline workhorse from coast to coast after her illustrious service with Air Canada. TCA Viscount looking brand new at Toronto Malton, 1956. No other information is known about this beautiful kodachrome slide.