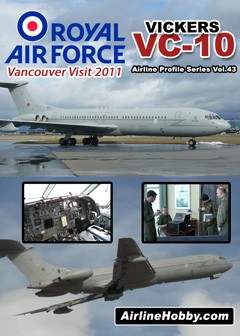 NOTE: This short 40 minute DVD is for classic jet fans only!

In early March of 2011, Royal Air Force Vickers VC-10 C.1K XV104 and her crew made a very much welcomed visit to Vancouver in order for some maintenance to be performed. Given the type’s rarity, videographer Henry Tenby did extensive filming, including the VC-10’s engine starts, run ups, extended taxi footage, and the final departure back home to Brize Norton on March 3. With exception to the flightdeck and cabin footage filmed during run-ups, this DVD offers mostly exterior footage. In response to popular demand, we’ve decided to release this short 40 minute DVD, so VC-10 fans can savour the sights and sounds of this superb aircraft.