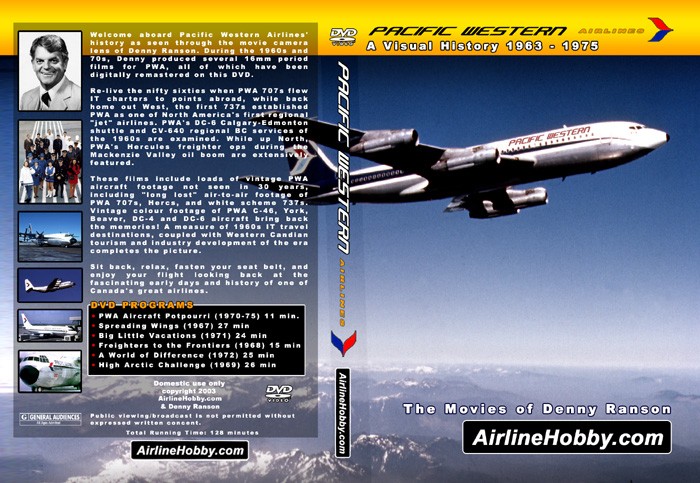 Welcome aboard the history of western Canada’s favourite airline, Pacific Western Airlines as seen through the movie camera lens of Denny Ranson. Sadly, Denny passed away in late 2007, but Denny’s work and memories live on forever in this DVD.

During the 1960s and 70s, Denny produced several 16mm period films (with narration and sound) for PWA, all of which have been digitally preserved on this Limited Edition DVD.

Re-live the nifty sixties when PWA 707s flew IT charters to points abroad, while back home out West, the first 737s established PWA as one of North America’s first regional “jet” airlines. PWA’s Hercules freighter ops during the Mackenzie Valley oil boom are also highlighted.

The films include lots of vintage colour PWA aircraft footage not seen in 30-plus years, including “long lost” air-to-air footage of PWA 707-138Bs, Hercs, and PWA white scheme 737s. Vintage colour footage of PWA C-46, Anson, York (air-to-air), Beaver, DC-4 and DC-6 will bring back memories for many who started their airline careers with PWA back in the golden era of the 1960s. A measure of 1960s IT travel destinations, coupled with Western Canadian tourism and industry development of the era, help capture the early days and history of one of Canada’s great airlines.

Sit back, relax, fasten your seat belt, and enjoy your flight looking back at the early days and history of one of Canada’s great airlines.